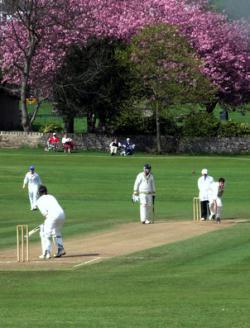 
This is not the place to expound the rules of cricket, a thankless task as Michael Parkinson once found when his American listener asked: And they do all this on horseback? Its far easier to explain why cricket has become such a national institution.
Test cricket may be thought of as the sports greatest height, but that only tells a partial story. As the cement that binds communities, village and club cricket is just as important, perhaps more so. Indeed with perfect wickets, finely honed technique and expensive equipment the test match is a world away from real cricket. Real cricket goes on at Harling where a bowler of left-arm mysterious catches the village butcher (batting with its doctor) on the boundary, overlooked by the beautiful church. It is a works match in Nottingham . A club game in Edenfield where a retired medium-pacer is dragged back for one more season.
But the Lords Test and the village game are twins, if not identical: their shared DNA includes (Australian readers look away now) an underlying desire for fair play; a place for grace as well as power; an appreciation of the opposition; and centuries of tradition behind every match.
There is another more contemporary context for cricket as an institution: it is one of the rare elements of our life that breaks barriers between the sometimes sadly separate cultures making up modern Britain: where those of Asian origin; or descendents of men who arrived on the Windrush; the baker and the candle-stick maker as well as the aforementioned butcher, mix with the squire and the vicar. And mysteriously they mix in pavilions which always smell exactly the same whether they be at an ancient public school, a Yorkshire village, or a municipal recreation ground, a sacred blend of tea, whitewash, polish and linement.