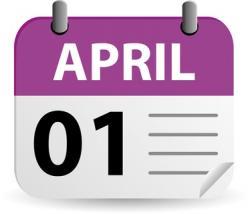 The origins of April Fools Day are obscure, and much debated (code for nobody really knows). It has been suggested that the change to the Gregorian calendar was behind it, those adhering to the old Gregorian version being regarded as fools; it is strangely said to be the day when Noah sent the raven to find land  a fools errand at that time; in France they say that it dates from a king, Charles IX, who changed the first day of the year from April 1 to January 1, those not falling into line being derided for foolish behaviour.
In this country, unlike say France and the USA, it is traditional for pranks to end at noon; those carrying on afterwards being themselves dubbed April Fools however successful their jokes.
In less sensitive (and litigious) times it was a common occurrence for apprentices, juniors and the like to have their legs pulled on April Fools Day: being told to go to the stores and ask for a long stand was one regular; decorators would get their new juniors to go for striped paint.
Schoolchildren did (probably still do) carry out unsubtle pranks like pinning Kick Me signs to peoples backs. But for once the best of the nation comes from Fleet Street and TV land in London .
The Guardian always seems to make a special effort, memorably (using British insularity against us) featuring a holiday report on San Serriffe in the seventies; and very recently announcing that the paper would only in future appear on Twitter (be careful what you wish for). Reports that Big Ben was to go digital in 1980 were perhaps technologically of the moment, but surely fooled few; whereas The Daily Mail (not normally associated with fun perhaps) scored a bull with the 1982 story about copper wire in certain bras interfering with radio signals.
The all-time classic was of course Panorama in 1957 broadcasting a report on the spaghetti harvest in Italy, a tale believed by the British in their naive millions, or so we are told, because Richard Dimbleby and the BBC simply wouldnt lie, would they?