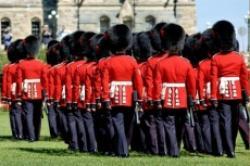 Changing the Guard must surely be one of the most, if not the most popular tourist attractions in London . Changing the Guard (properly known as Guard Mounting) takes place daily outside Buckingham Palace at 11:30am and Windsor Palace at 11:00am. At Buckingham it is held on alternate days in the autumn and winter months whilst at Windsor it is only daily between April and July, the rest of the year it is also performed on alternate days. In very wet weather the ceremony is not performed, possibly due to the fact that the distinctive Bearskin might look somewhat bedraggled after a lengthy ceremony in extreme rain! The Bearskin is the world famous tall furry black hat worn by the guards. The uniform itself is part of the spectacle. Along with the Bearskin is worn the distinctive bright red tunic, which ensures that any parade involving the guards is an eye catching event.

The Queens Guards have been guarding the monarchy of Britain since the 17th Century and currently the guards are drawn from five regiments; The Scots Guards, The Irish Guards, The Welsh Guards, The Coldstream Guards and The Grenadier Guards. Originally the monarchs lived mainly at Whitehall Palace but moved to St James's Palace in 1689. At this time the Queens Guard moved with the monarchy. Later, in 1837, Queen Victoria moved the monarchs main residence to Buckingham Palace. This time, the Guards remained at St James's Palace with a detachment guarding Buckingham Palace; which is how it remains to this day. Occasionally the Queens Household Troops are not available due to other operational commitments and the role is performed by other infantry battalions.

The ceremony takes about 45 minutes in all and involves the Old Guard handing over duty to the New Guard, whilst a band play anything from traditional military marches to contemporary pop hits. The guard consists of four sentries at the front of the palace when the Queen is in residence, which reduces to two when she is not. The New Guard marches with all due pomp and ceremony, resplendent in their red tunics and bearskins. The leader of the new company salutes the old and the guard duty is exchanged, leaving the Old Guard to march away. A third venue where you can watch the Guard Mounting ceremony is at Horse Guards Parade, situated to the east of St James Park. This is performed at 11:00 each day and 10:00 on Sundays, but is a slightly shorter 30 minute ceremony.