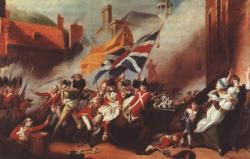 In spite of the military leaders on both sides dying, the Battle of Jersey on January 6 1781 was more farce than tragedy.
Britain and France were at war, France having allied with the colonials in the American Revolution . Jersey was a British naval stronghold near the French coast, many privateers also using it to plunder French, Spanish and American shipping. As 1780 ended the Great Siege of Gibraltar was 18 months old. An attack on Jersey potentially diverted British forces from Mediterranean action and would hit the privateers.
The French feared any gains would be embarrassingly short-lived, so they privatised the invasion, an army colonel Baron de Rullecourt given money, weapons, and about 2,000 supposed deserters. Landing on January 5 Rullecourt lost (geographically) half his men, but marched unnoticed past drunken guards and forced  or rather fooled - Lt-Governor Corbet to surrender, persuading him the invaders numbered thousands. A 24-year-old Major Peirson saw through the bluster, and organised an attack on the French camped in St Helier market square, defeating the enemy in minutes. Peirson was shot in the heart as victory neared; Rullecourt died next day of his wounds.
Britain soon bolstered Jerseys defences, realising a more determined invasion would have captured the island.