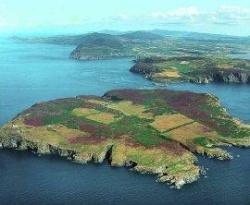 Steam trains, Viking castles, golf, countryside and Britains most famous motorcycle race give the Isle of Man a high profile.
A dot in the Irish Sea, the Isle of Man packs heaps of attractions into a small (430 sq. mile) package. Theres history - in the shape of feudal castles and an ancient abbey - attractive countryside and seashores, and a wealth of spectator and participatory sports.
Eight golf courses, among them the magnificent Mount Murray Course , home of the Isle of Man Open and complemented by a fine four-star hotel, make the Island a perfect spot for a golf holiday. Offshore, theres sailing, fishing and scuba diving.
Thousands of motorcyclists flock to man each year for the hair-raising Isle of Man TT , one of world motor cycling's most challenging events.

Once an independent Viking kingdom, Man is proud of its ancient parliament, Tynwald, which was founded in 979 and still makes the islands laws, for Man is a self-governing Crown dependency which belongs neither to the UK nor to the European Union.
The islands coastline alternates sandy and pebbly beaches with steep cliffs and offshore islets where puffins, gannets and guillemots breed, and is dotted with pretty villages like Port St Mary , Laxey, and Castletown. Its major towns, Douglas and Ramsey , are bustling harbours which are popular resorts for British and Irish visitors in summer, with grand Victorian promenades, good restaurants, plenty of cafes, bars and clubs and even casino gambling.

The islands newest attraction is Rushen Abbey , founded in 1134, which opened to the public in April 2000. Rushen is still being rediscovered by archaeologists, and a live interactive video link with archaeologists on site brings visitors up to date on the latest discoveries. The Abbey is the latest addition to a portfolio of attractions promoted by Manx National Heritage as The Story of Mann, along with the Manx Museum and the House of Manannan , the exciting heritage centre at Peel which uses the latest technology to re-enact the tales and superstitions of Vikings, Celts and Manx islanders and houses Odins Raven, the replica Viking long ship built to mark 1000 years of Tynwald in 1979. Near the abbey stands Castle Rushen, a well-preserved medieval stronghold begun by Magnus, last of the Viking rulers of Man, in the 13th century, and at Peel - once the seat of the Norse Kingdom of Mann - the Peel Castle Trail leads visitors through the islands most imposing fortress.

Mans landscapes are charmingly unchanged, with moor land and 17 wooded glens linked by miles of walking routes, ranging from the 90-mile Road of the Gull, a coastal footpath all the way round the island, to the Millennium Way, historic royal highway, and the Heritage Trail, an easy walk along disused railway lines. Not that all of them are disused. For the less energetic, the tiny trains of the Isle of Man Steam Railway, the longest narrow-gauge steam line in the British Isles, chug their way from Douglas to Port Erin . On the Manx Electric Railway, the worlds oldest working trams trundle between Douglas and Ramsey, and the Snaefell Mountain Railway offers a lazy way of getting to the summit of Snaefell, mans highest peak at 2036 ft (631m). From here on clear days you can see the distant coasts of Ireland, Scotland, England and Wales - and you may well feel that this tiny island can offer as much in one handy-size package as its larger neighbours.

Getting There
By air:
Direct flights from mainland airports including London (Gatwick, London City and Luton), Birmingham, Blackpool, Glasgow, Leeds/Bradford, Liverpool, Newcastle, Manchester, Southampton, Jersey and Dublin . Carriers include Fly BE
By sea:
Isle of Man Steam Packet sails from Heysham and Liverpool year round plus Dublin and Belfast in summer.