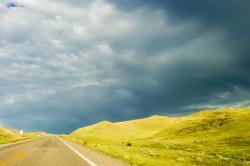 Unless your trip is to just one place it's likely you will feel the need to use the car - or maybe motorbike - when travelling about Britain, though it is worth considering using the railway network or coaches and buses (see separate sections). There is even the compromise solution of using trains or planes for long journeys, then hiring a car to tour whichever region you arrive at: with a bit of forward planning you can get cheaper tickets; and if, say, driving to the Highlands from Southern England you'll save at least one night in a hotel and gain a relaxing extra day each way.

Our road network is generally free if you disregard the road fund license British drivers pay. But there are some roads where you have to put hand to pocket: for most cars inner London (£5) and Durham (£2) have congestion charges which in effect are tolls; and the M6 around Birmingham has a paid section as an option, (£3) which at peak periods saves a lot of time and frustration (charges may differ for other vehicle types and outside peak periods). Many bridges charge - for example the Severn, Forth, Humber; the Erskine Bridge in Glasgow; and both the Dartford Tunnel and Bridge.

Do keep some change in the car - most such places have automatic machines that are far quicker than waiting in the long queues at the manned booths.

Actually, there are some toll-roads and -bridges, hangovers from the turnpike era of the 18th century or even earlier, that you may want to head for on purpose: for example the toll-gate on College Road in Dulwich; the road to the other-worldly Spurn Head in the Yorkshire Wolds; or the toll-road around Porlock Hill. They won't break the bank, and are either scenic or curiosities in themselves.

Brits often curse the motorway system, but those of us who can remember a time before the M25 and even the M62 know that driving is easier now than in those long gone days. There are even sections that are particularly scenic - part of the M6 through Cumbria was recently voted most scenic drive in England; and that same motorway a few miles north of Keele Services has splendid wooded hills to recommend it.

We take the motorway to get from A to B as quickly as possible. But there are some routes that are worth considering as part of the holiday experience such is the beauty of the countryside. The A149 road from King's Lynn to Cromer has some sea views, magnificent Norman churches, pretty villages and the occasional barn owl to be seen. The A838 from near Lairg up to Durness on the northern limit of Scotland skirts lochs and hills of amazing beauty, but be prepared to give way quickly on this very narrow route.

The aptly-named Snake Pass between Sheffield and Glossop is a route I'd take by choice, though never if snow threatens - it always seems the first place mentioned as closed in bad winter weather; and the A39 through the Somerset Levels is another where driving is as pleasant as arriving.

Away from the mainland, island hopping in the Hebrides (see our section on using ferries) takes the driver through spectacular landscapes; and charming people too - on Islay the drivers of the few cars and trucks you'll meet on the roads will wave as if they know you. And of course there is the Isle of Man, where some roads are still without speed limits - if you fancy putting your clog down on the 37-mile TT circuit, you can - but do keep your brain in charge rather than some other part of your anatomy. A prettier route on the same island is the coastal road, the sort of place you feel you're motoring rather than driving, as it were.

Whether you are just going from A to B or touring we hope that one or more of the following tips will be useful: