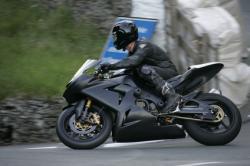 Motor sports on the Isle of Man

The Isle of Man sits between Ireland and England in the Irish Sea and is internationally famous for the annual motorcycling extravaganza that is the TT (Tourist Trophy) races. Although the TT races are the best known motor sport event linked to the Isle of Man they are far from being the only petrol fuelled entertainment available their. Motorcycle enthusiasts can also visit the island to enjoy the annual Manx Grand Prix , originally the amateur version of the TT, that takes place around the end of August and early September. Both of these historic motorcycle racing events attract thousands of visitors to the Isle of Man and if you are planning to go, book your travel and accommodation early.

If you do decide to go on a whim it is worth hunting around for cancellations. The very fact that you have to book so far in advance often means people are forced to change their plans. The classified ads in Motorcycle News are a favourite hunting ground but it is also worth calling the ferry operator and searching for last minute rooms. The Isle of Man Steam Packet Company operates the only ferry services to the Island. Departing from Heysham , Liverpool , Dublin and Belfast the vessels are conventional ferries but these are complemented by Fastcraft services during the busy summer months. Hotels such as the Hydro Hotel on Queens Promenade in Douglas and the apartments at the 3 Star Cherry Orchard Apartment Complex in Port Erin are very popular with visitors to the races. Hotels such as the Savoy Hotel on Central Promenade, Douglas offers reasonably priced accommodation on the sea front. The Wellbeck Hotel on Mona Drive, just off the Central Promenade in Douglas is another historic hotel harking back to the Isle of Mans tourist heyday. The hotel is known for a mix of the personal touch and attentive service you would expect from a family owned business and the prices are quite reasonable. The Town House on Loch Promenade in Douglas offers the visitor the best of both worlds with a range of self-catering apartments within a serviced hotel environment.

Many people choose to avoid the busy ferries and fly to the Isle of Man. Aer Arann fly to the Island from Dublin and London City, Blue Islands have departures to the Island from Jersey and Guernsey . Flybe have services from Birmingham , Gatwick , Manchester , London Luton , Liverpool , Glasgow , Edinburgh while Manx 2 fly from Belfast, Blackpool , Leeds Bradford , East Midlands , Newcastle and Jersey. EasyJet will operate flights between Liverpool and the Isle of Man from 21st May 2010.

The islands rich motor sport history means it is a natural location for holding classic events, such as the Manx Classic . Typically this event features sprints and hill climbs over three days in Spring. Visitors to the event can expect to see immaculately prepared original Minis and Lotus single seater race cars battling it out amongst some stunning Manx scenery.

Rally enthusiasts are well served by the Manx Rally , the Isle of Mans premier rally event which takes place annually in May. Set over 120 miles of some of the fastest tarmac stages in Europe the rally is a visual stunner. If that event wasnt enough, it is followed in July by the Rally Isle of Man . This event mixes the best of modern and historic cars, typically over two days and four rallies.

Visitors to the races arent just going to watch the motor sport, the Isle of Man is steeped in history and is rich with visitor attractions. Peel , the ancient fishing port on the west of the island is the home of the House of Manannan museum. Built in 1997, at a cost of £5.5M, the museum incorporates the old Peel railway station. The museum houses a replica Viking longship, Odin's Raven. Built in Norway the ship was sailed across in 1979 to celebrate the millennium of Tynwald, the Manx parliament. Manx Transportation Museum , is housed in the former Brickworks building near to the harbour, is another popular draw in Peel. The magnificent harbour features a castle and the town, or city as it would be better known, actually hosts a modest cathedral.

The key to a successful visit to the Isle of Man is planning, preferably well in advance. Cancellations do mean there are opportunities to book at the last minute for those travelling on a whim. Motor sport is dangerous and visitors should respect all safety notices, the directions of event marshals and take careful note of road closures. If you follow this advice the Isle of Man will reward you with a memorable holiday that youll be able to recount to you petrol-head grandchildren in years to come.