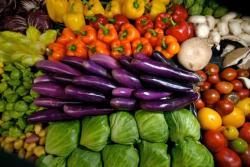 So many British holidaymakers bring back memories of wonderful markets in Provence or Tuscany or Catalonia, but they would never dream of making the same effort to find the local markets in England. This is sad from more than one viewpoint. Firstly they are missing out on something traditional and local, and secondly the markets could do with their custom.

A vital date in the history of so many towns around the country is when they received their market charter. Henry II , or King John , or maybe later King Charles II , monarch after monarch granted charters for regular markets to towns throughout the land. There are plenty with unbroken links to those far off times. And the links can include some wonderful foodstuffs.

Three examples among a multitude. Great Yarmouth in Norfolk got its first charter in 1209 from King John. The market place is surrounded by ancient buildings as well as less favoured modern ones  the 1702 Fishermens Hospital and the huge Parish Church of St Nicholas , patron saint of fishermen, founded in 1101. And in the market you will find the best cockles and whelks that money can buy, served in little containers ready for drenching in vinegar and a sprinkle of salt. Even picky kids will be tempted to try some.

Next is the market of Bury in Lancashire . A fantastic place for meat and vegetable shopping in general, and with boasting 250,000 visitors a week its a thriving place too. The steamed potatoes here are mouth-watering, served with butter and salt, but the real delicacy is Bury black pudding . It is sad that something the middle class foodie would lap up in France (ah! boudin noir!) is shunned in England by those who should know better.

Like the best peasant food the world over the ingredients are a testimony to poverty and ingenuity driving the creation of a delicacy made from seemingly unpromising ingredients. Basically black pudding is made from blood and fat. But the secret is the flavourings used: in Bury traditionally they use pennyroyal, marjoram, thyme, mint and celery seed. The Black Pudding Stall serves them hot with lashings of mustard, and if you turn your nose up at that more fool you.

The third market Ill mention is Lancaster . The surroundings are historic, with a real atmosphere to the streets and shops round the street market on a Saturday.

The food at the market is a mixture of the old and the new that gives a snapshot of modern England. Here you will find at least twice a month the fabulous salt marsh lamb raised on Cockerham marshes by the Lawson family, farming the land for generations. Here too are stalls selling wonderful olives and locally made Italian-style breads. Further on is the oriental food stall. And on a corner exuding utterly irresistible smells is an old-fashioned donut stall, though you may have to queue behind some of the boys from Lancaster Grammar, founded in the 13th century, displaying the appetite and digestion only the young possess.