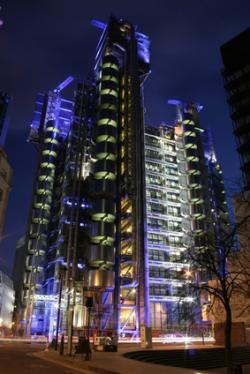 It was originally established in Edward Lloyd's coffeehouse around 1688 in Tower Street in the City of London . The coffeehouse was frequented by sailors, merchants, and ship owners and Lloyd provided reliable shipping news along with the coffee. The shipping community used it as a meeting place to discuss insurance deals. Lloyd moved his coffeehouse to Lombard Street in the heart of the City , just after Christmas 1691. Today, a blue plaque commemorates the location in Lombard Street. Even long after Lloyd's death in 1713 this informal meeting place continued to be used for formalising what were often quite sizeable deals. This continued until 1774 when a committee was formed and the members moved to the Royal Exchange where they became The Society of Lloyd's, later to be incorporated by the Lloyd's Act 1871.

During the long history of Lloyd's Names, usually rich individuals, backed policies written at Lloyd's pledging all of their personal wealth. Unlike shares, which have long enjoyed limited liability, this backing is with unlimited liability. If it all goes wrong an
individual stands to pay out with everything they own. The losses during the financial meltdown of the early 1990s meant that many Names were declared bankrupt. Somewhere upwards of 1,500 out of the total of 34,000 Names at the time were ruined by this unlimited liability. It had a very negative effect on the ability of Lloyds to raise backing for future issues and changes were needed. From 1994 Lloyd's allowed corporate members into the market, granting them limited liability. The backers with limited liability only stand to lose that which they invest, and no more. Now, individual Names underwrite only 10% of the risk at Lloyd's and are slowly being phased out altogether.

The Lloyd's building is now at no. 1 Lime Street, where it moved in 1986. Designed by architect Richard Rogers , the Lloyds building is one of the most unusual high rise office buildings in the Square Mile. It stands, rather appropriately, on the site of the old Roman Forum. The former façade from 1925 still survives.

The famous Lutine Bell stands in the great Underwriting Room of Lloyd's. It was formerly struck when the fate of a ship previously reported as overdue at its destination port became known. If the ship was safe, the bell would be rung twice: if it had sunk, the bell would be rung once. The bell is now only used for ceremonial purposes.