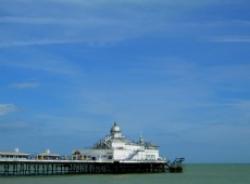 When all 500-feet of Fleetwood s seaside pier went up in flames in September, 2008, the loss resonated throughout the country. Coming just months after Weston-super-Mare s waterfront was devastated as its Grand pier was razed, causing over £1 million worth of damage, it was too much to bear for a nation whose love to be by the seaside was inextricably linked to her love of the seaside pier. An icon of the traditional bucket and spade beachside holiday, the seaside pier is a British institution, on top of which variety shows, fun fares and overweight comedians entertained a country seeking salty air and an escape from the bricks and mortar of the city. Where the waltzers loosened stomachs made nauseous from candy-floss consumption and the Dodgems brought out the bullock lying dormant in all of us. Reaching out to the sea, Britains seaside piers have been a feature of the countrys holiday towns since the Victorian and Edwardian eras, when the family holiday became a pilgrimage to the beach, to eat ice cream and ride on donkeys. Holidays spoiled by the weather but made an annual event thanks to we Britons hardy refusal to bow in the face of a force-nine gale and scattered showers: the British summertime is one of those notorious misnomers; the seaside pier offered a merciful retreat from the elements. Fleetwoods pier was built in 1910, becoming one of the last to be built in the country. Although a national treasure, plummeting air fares and package holidays saw the seaside piers suffer. The beaches and piers of Blackpool may have secured regular footfall under the shadow of the Blackpool Tower , but others fell into disrepair. In 1979, the National Piers Society was founded to preserve the nations seaside piers in the metaphorical aspic of nostalgia and promotion. Their efforts ensured that those of the Victorian engineers who built these magnificent structures would not be lost to contemporary indifference. Much of Britains entertainment culture was developed on the decks of its piers. End-of-the-pier comedy became the staple of the British stand-up circuit, innuendo was barely secreted, Britains prudish nature was poked at by comedians whose outlook was seemingly anachronistic by the time the 1970s were over. Southend-on-Sea , Essex, boasts the longest pier, standing at 7,080 feet: Weston-super-Mares Birnbeck is the shortest at 1,350 feet. What better way to be at sea for those who have left their sea legs at home? And where better to eat your jam sandwiches as the sun sets on one of Britains cherished and strictly limited long, hot summer nights?