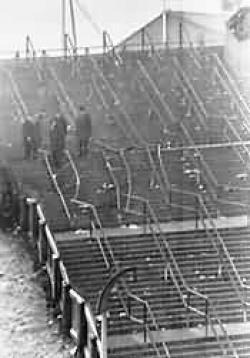 The Old Firm derby game on Saturday January 2 1971 should have been something remembered with pleasure by both sets of supporters: the New Year celebrations were barely over, and there was the rest of the weekend to look forward to; the match was an honourable draw, with the legendary Jimmy Johnstones 89th minute goal matched by one in injury time by Colin Stein for Rangers. But instead the game is forever to be recalled as the occasion when 66 supporters died in a horrific crush on the fateful Stairway 13.
Though initially the accident was blamed on departing Rangers fans trying to return to celebrate their teams equaliser, in fact this was not the case. It seems probable that a trip or slip by someone at the head of the mass of fans trying to get away from the ground early caused a chain reaction behind that initial point. The stairway rapidly turned into a mass of entangled bodies lying several deep, those lower down asphyxiated by the weight of the people above them.
Of the 66 dead almost half were teenagers; the oldest to die was just 45; the youngest 9-year-old Nigel Pickup, over in Scotland for a family visit from Canada.