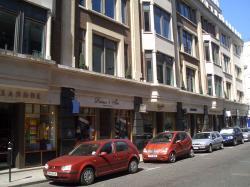 
Since the reign of George II Savile Row in Mayfair has been associated with bespoke clothing, in particular with the making of perfectly tailored suits. Savile Row , running parallel to the far larger Regent Street, is suitably discreet, though in recent years certain of its shop windows have featured items that Jeeves would have considered sudden.
It is very hard to identify what sets a Savile Row suit apart other than quality. The cloth will be perfect; the tailoring precise, able to camouflage embonpoint or even on request make a firearm invisible. It will fit to perfection, a bespoke commission requiring several visits by the customer for measurements, interim fitting, and consultations about the look of the thing. And it will in some indefinable way be gentlemanly.
Some of the businesses on Savile Row have been around for a considerable time: the Hawkes element of Gieves and Hawkes was founded before the USA; Huntsman opened in 1849; Davies and Son began operating in 1803, though it only moved to Savile Row in the 1980s; and Norton and Son was established in 1821.
Getting the Savile Row look is not cheap; but then quality rarely is: you can expect to pay 20 times or even more the price-tag of a high street suit. But it will last far longer; and give that cachet and confidence which comes from owning a suit made by a company that may have clothed say royalty, Churchill , Hollywood stars or The Beatles.