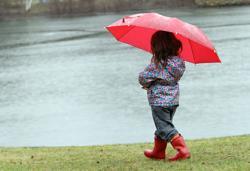 You never seem to be quite sure what you are going to get, the seasons are more of a rough guide than any scientific basis for deciding what you are going to need to wear on a particular day. On a spring day you might be treated to a freak snow storm in the morning, only to see all traces of it melted away by a pleasant afternoon sun, such that it is all gone by tea time. Then there is rain. Britain is well known for wet weather, although it is worse in some areas than others. All this precipitation is perhaps not surprising seeing as Britain is a small land mass surrounded by water. Its also no coincidence that much of the land is punctuated by significant lakes and rivers charged with the task dealing with all this falling rain. Britain has some suffered some significant droughts, especially in recent decades. But the hard truth is that, when in Britain, one has to expect rain at anytime of the day or night and during any season.

When are we going to get a fine day? is an expression youll soon start hearing during the rainy days. How odd then that as soon as the sun comes and warms this damp little island up a bit out come the sun moaners. Then all you hear is: Its too hot! People moan that we dont get much sun in the summertime and then it seems that those exact same people spend their sunny days moaning about the heat!

So why is it that the Brits are famous for talking, or even moaning, about the weather? Well, the unpredictability of the weather is a problem. When in Britain youre never sure quite what to expect, so being appropriately prepared for the conditions can be difficult. In countries where it is predominantly sunny, they fit air condition in shops, houses and cars as a matter of course. Similarly, nations that get large amounts of snow each year prepare themselves with tyre chains, well insulated buildings and plenty of warm clothing. This is not how it is done in Britain, however. It doesnt snow quite enough for it to be worth the investment in tyre chains and fitting air conditioning is simply asking for a long, cold and wet summer