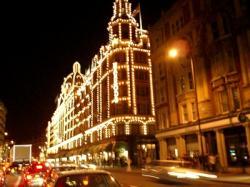 
You get a large round bath. And its made of ebony. Where from  Harrods was destroyed by the Vogons. This exchange from The Hitchhikers Guide to the Galaxy illustrates the popular  and not inaccurate - view of Harrods as the repository of the most exotic, the most luxurious goods to be found anywhere, in accordance with its motto Omnia Omnibus Ubique, generally translated as All things, for all people, everywhere.
The original Harrods, somewhat incongruously, was in Stepney , opened in 1834 by Charles Henry Harrod as a grocers shop. He had the insight to invest in a move to Brompton Road in Knightsbridge in 1849 in preparation for the Great Exhibition which was to be held nearby. That new store branched into other areas  stationery, perfumes and so on  and prospered; but it was Charles Harrods son Charles Digby Harrod who made it a London , indeed a world institution: in 1861 he revamped the place; then in 1883 he took advantage of a fire to rebuild on a far grander scale in Italianate architectural pomposity.
Harrods today is vast, over 90,000m2 of sales space. Although its New Year sale is famed for some incredible bargains, the stores success is definitely not built on selling cheaply: rather it aims to stock everything the well-to-do might desire from a department store; the best brands; the best range  the food hall legendary in that respect; the best customer service - rumour has it that at one time Harrods employed a man whose job was to be fired if a customer complained about faulty goods.
In the first half of the 20th century as well as members of the royal family and the British elite, it was wealthy Americans who were attracted to the place; from the 1970s onward it has been oil-rich Arabs and more recently Eastern Europeans.