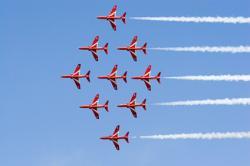 Aerial displays have been a traditional part of large fairs and shows in Britain for several generations. Hot air balloons, biplanes and Spitfires all have their place in this, but there is one team of aerial acrobats that have become so famous that no self respecting major British event should be without them; The Red Arrows.

Officially known as the Royal Air Force Aerobatic Team, The Red Arrows have been delighting upturned faces at British and international shows since the mid 1960s, performing a variety of stunts including loop the loops, death defying dives and, of course, just flying past really low and very fast. This last one might not seem much of a stunt, but it is probably the only time that most of us will ever even come close to imagining the phenomenal speeds at which these pilots operate. To further enhance the spectacle, the jets trail smoke patriotically coloured in red, white and blue at various points in the display.

The team originally comprised seven Folland Gnat trainer fighters, which was expanded within a few years to nine; thus allowing the famous Diamond Nine, one of The Red Arrows well known flying formations. Towards the end of the 1970s the Folland Gnats were replaced by the BAE Hawk trainer.

The current base for the Red Arrows team is at RAF Scampton in Lincolnshire . The team moved there in 1983 when the CFS (Central Flying School) moved it base of operations to RAF Scampton. The team was located prior to that at RAF Kemble, now used by the USAF as a maintenance facility for the A-10 Thunderbolt aircraft. The Red Arrows have performed over 4000 displays to date since the creation of the team in the mid 1960s. The team is comprised entirely of volunteers, but in order to join the team you have to have proved yourself as a pilot in one of the RAFs front line jet fighters for at least one year of active service. The red Arrows prides itself on its commitment to professionalism and has a superb safety record thanks to its insistence on the highest of standards at all times.

The team will receive around 300 requests for flypasts this year alone, and will look to fulfil about 80 of these! Unfortunately, they wont do your wedding, birthday or even your funeral, so dont try and book them to write that romantic wedding day message in the sky.