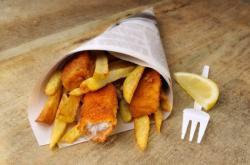 
Fish on Friday is one of Britains long-standing traditions and for most people, this now means fish and chips. Even though American-style fast food restaurants have sprung up along all over Britain, the original fast food of Britain still remains strong with fish and chips shops evident in abundance in towns and cities all over the country.

Fish has naturally been eaten in Britain for longer than any history will recount. Chips, however, are a more recent addition to the British diet. The earliest reference in British writings is found in the 1859 Dickens novel A Tale of Two Cities. Certainly, the practice of eating fish and chips grew in popularity amongst the working classes around this time, coinciding with an increase in trawl fishing in the North Sea. The chip itself probably came over the North Sea from Belgium, where the practice of frying fish shaped pieces of potato dates back to at least 1680.

It is usually easy to spot where the best fish and chips are on sale in any British town. Just trawl around the town at just after five-o-clock on a Friday evening and check which shops have queues coming out of the doors; there you will likely find the best chips, as judged by the people who spend a great deal of time on a Friday waiting for them! Of course, fish and chips are not only enjoyed on Fridays; and whilst many people rigidly eat them every Friday without fail, most people are happy to enjoy them any day of the week as an inexpensive treat.

The true home of British fish and chips is the seaside. The seaside holiday is the traditional British holiday, still popular with many despite it now being relatively common for Brits to holiday abroad. There is still a special magic about the classic British seaside resort; with fish and chips being very much an integral part of the spell. Perhaps, because the fish comes from the sea it always tastes better at the seaside, regardless of whether it was caught anywhere near to the particular shore it is eaten at. One thing is certain, most people will still insist that fish and chips always taste better from the traditional paper wrapping, with plenty of salt and vinegar. Part of the appeal of fish and chips seems to be lost if theyre transferred to a plate. The best way to enjoy fish and chips is probably from an open wrapper, walking or sitting on a British seaside promenade while listening to the waves lapping at the shoreline.