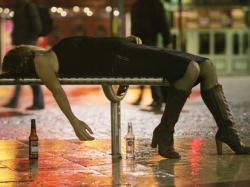 In some cultures, alcohol is pretty much a part of daily life. Moderate consumption, particularly with meals, is the norm and young people are weaned sensibly on to alcohol in a normal family situation. Not so in Britain, it seems. The tradition in Britain seems to be more a case of keeping youngsters back from alcohol until they are literally desperate to get their hands on it.

Adults, rather than drink moderately throughout the week, save it all up for payday and the weekend, and then go and get totally hammered! Unfortunately, that is very much the British way, with no middle ground.

British town and city centres are very lively places on a Friday and Saturday night and probably not the place to take your family! Of course, for the vast majority of the good citizens of Britain it is all good fun and the evening will pass pleasantly and without incident. Alas, there are those always who seem unable to control both their consumption and behaviour when intoxicated! Thanks to these people, it is not only the pubs and clubs whose business swells on a Saturday night! Casualty Wards also find themselves doing brisk business! Binge drinking at weekends is an old British custom and it used to be that the person who got sick and/or went silly was ridiculed by his mates. Sadly, nowadays it seems that such behaviour is seen as heroic and to be admired.

Other businesses do a brisk trade thanks to this British custom. Many fast food places are at their most busy around pub closing time. In recent decades, Britain has seen the rise of one of the most popular post pub haunts of the binge drinker, the Kebab House. Much as the drunken customer can be an irritation to the hard working staff of the Kebab House, they are also the life blood of the business. For whom else but someone whose senses were dulled with alcohol could endure the smell of a Kebab House whilst they wait for their food? Unfortunately for the street cleaners, much of what is sold by the Kebab House is later output onto the pavements by the unfortunate binge drinker, who finds the combination of beer and kebabs is just too much to keep down!

The concept of a fixed and relatively early closing time had been blamed by many for this curiously British drinking pattern. Other European nations have flexible opening hours and seemed to take a more relaxed attitude to drinking. In Britain, although laws on opening times have now relaxed considerably, there still seems to be a race on with many drinkers to see who can be the first to get very comprehensively drunk.