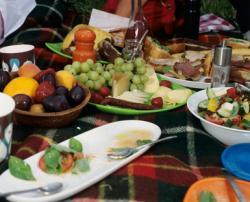 The Picnic is by no means exclusive to Britain but it is certainly a tradition of this country. Although now under pressure from the trend towards fast food outlets and motorway services, the picnic remains a popular British pastime during the spring and summer months.

Traditionally, the food is carried in a special wicker basket known as a hamper. This sturdy basket was usually made with a lid that allowed the food to be covered and kept fresh for longer. Nowadays, the traditional Hamper has been largely replaced by plastic coolboxes, which allow the use of special frozen blocks to help keep the food cool and fresh all day. It is also customary to bring a table cloth to lay on the ground or picnic table as appropriate. In the image conjured of picnics of yesteryear, this is nearly always a gingham check table cloth. Modern versions are often plastic, allowing for ease of cleaning and reuse. The meal prepared would certainly include some form of sandwiches and usually the food is contributed to by several of the participants of the picnic; although I am sure that the mother would have had done most of the work for small family picnics in days gone by.

The origin of the word picnic seems to have come from the French pique-nique, the first known mention of which is from 1692. This was used to describe the practice of eating in a restaurant and bringing your own wine. It then developed into its current usage after becoming associated with meals where several participants contributed to the meal.

Picnics are mentioned in the works of Jane Austen and Charles Dickens , showing that they were popular in England during the 18th and 19th centuries. Austen refers to a disappointing picnic in Emma and in Dickens The Mystery of Edwin Drood, Miss Twinkleton contributes herself and a veal pie to a picnic which takes place in the story.

The countryside is a popular destination for picnics and London s many parks are also attractive spots for a bit of eating out in the open. A number of the well-heeled food halls cater for those who wish to do this in style. Harrods , as well as Fortnum and Mason , offer pre-packed picnic hampers as well as made to order baskets. The seaside resort is another favourite traditional spot for a picnic. Although once again, the sight of families unpacking their food among the dunes is less common now with the spread of fast food outlets to almost every corner of the land.