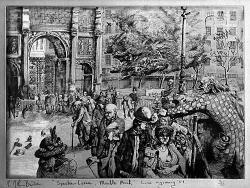 
Though some have tried to organize such debating hotspots elsewhere, with at best patchy success, there is normally only one such place that is meant when the phrase Speakers Corner is used: the north-east corner of Hyde Park , close to Marble Arch .
Freedom of speech is a relatively new concept in this country, and constantly under threat, not least lately with moves that could make criticism of religious beliefs a hate-crime. The political representation so hard-won by such as the Chartists and the Suffragettes is now equally threatened by the rise of a narrow political class in recent years. Thus the tradition at Speakers Corner of open speech on contentious issues, personal beliefs, politics, and in fact any subject you wish to broach should be celebrated and protected.
Particularly but not solely on Sundays speakers representing parties, pressure groups, sects or just themselves appear at Speakers Corner to have their say. The process is robust; hecklers are not ejected under prevention of terrorism legislation; the police do not intervene unless swearing becomes unacceptable or violence is threatened; being offensive to the views of others does not mean a speaker is silenced.
The reasons why Hyde Park should have become this democratic forum are complicated, some attributing it to the condemned mans last words at Tyburn close-by, others to Chartist meetings; an 1872 Act of Parliament delegated control of public meetings in parks to the park authorities, though it appears what was intended was not what obtains today.
Over the years some great names have spoken or listened at Speakers Corner: Lenin, Marx, Engels, William Morris , Marcus Garvey, and George Orwell to name but six. But pride of place in the local pantheon should perhaps go to Lord Soper who spoke there from the 1940s until just before his death in 1998 aged 95: honest, passionate, caring, and deadly with hecklers.