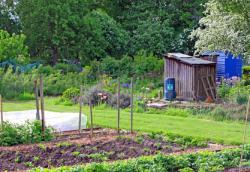 
The feeling that keeping an allotment binds us somehow to a distant agrarian past is no mere myth. It is easy to see in these little plots the strips of land Saxon peasants were granted by their Norman overlords.
Until the Industrial Revolution Britain remained an agricultural society, though the enclosure of our common lands, at least in England, began in the Tudor period. Enclosure accelerated between 1750 and 1840, when some 4000 Acts of Enclosure were passed, to the benefit of larger farmers and the ruination of poorer: such distorted power-relationships echoed again recently with the seizure of the Manor Garden Allotments in Hackney Wick to prettify 2012 Olympic facilities.
Respite from endless land-gabbing came in 1845 with a further General Enclosure Act which included provisions for ¼ acre field gardens. The famous St Anns Allotments in Nottingham just pre-date that act, the 75-acre 670-plot site dating from 1832; Birmingham s Guinea Gardens somewhat later.
The folly of our separation from the land was seen through the food shortages of WWI and WWII , addressed by allotment holdings that peaked at 1.5 million and 1.4 million respectively. In spite of a Good-Life-inspired surge in the 1970s numbers have declined again, with today about 350,000 allotments remaining in use  though it is thought 100,000 are on waiting-lists.
Enough history: allotments provide welcome fruitful spaces in our towns and cities; some are the equivalent of Russian dachas, their sheds with all the comforts of home. We happy few who eat fresh-dug new potatoes know what real flavour is - and value, laughing at £1.99 labels on five sticks of tired rhubarb, and people paying £25 a month to get fit by not going to the gym. Would we not have been healthier had we spent £9 billion on allotments instead of a global school sports day? And more secure in our supplies? And wouldnt Britain have been greener two ways?