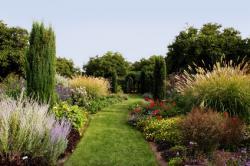 How many kinds of sweet flowers grow, in an English Country Garden? This is the opening line to a classic English folk song, which even made an appearance in the pop charts of the mid 20th century. It continues; Daffodils, heart's ease and phlox, meadowsweet and lady smocks The song goes on to detail some of the common flowers and later insects found in the garden. Being a traditional song it comes in many different lyrical variations; all of which seek to capture the special magic of the English Country Garden.

They say an Englishman's home is his castle. If this is the case then the grounds are at least as important to him as the castle walls! It is a long established tradition to produce a garden to be proud of. From the Middle Ages onwards the art of creating and maintaining an artistic and aesthetic garden has developed into a fairly complex
science. There are still a number of gardens in English stately homes that were created as far back as Elizabethan times and are still lovingly tended and open to visitors to this day.

Some centuries later there was a revolt against the ordered nature of these traditional gardens, which had its roots in the country gardens of the peasantry. This was further fuelled by the Romantic movement; rebelling against the intellectual order of Classicism, in favour of a more emotionally stimulating use of flowers and plants. The original country gardens of the peasantry were designed for practicality as well as beauty, often growing fruits and medicinal herbs. The Romantics who took up the style emphasised the beauty more than the practical; after all, unlike the peasants, they could afford to.

Roses and perennial flowers are common features of the English Country Garden. The Rose is, of course, the traditional symbolic flower of England. Different regions are represented by some of the different varieties, red being the most well known; presumable due to the outcome of the War of the Roses . In this civil war between the House of York and the House of Lancaster, the Red Rose of Lancaster being victorious of the White Rose of York. The tradition of the English Country Garden is still strong today, with many rural garden shows and fayres being the high spot to the year for gardeners who gear their whole year towards growing the prized flower/vegetable that will win first prize. Each year the gardeners calendar is crowned by the queen of the garden shows, the Chelsea Flower Show . Here, elements of the traditional English Country Garden are shown side by side with more exotic and extreme variations on the theme.