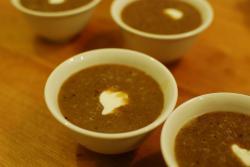 
Queen Victoria adored it hence the royal affiliation; the Goons poked fun at the stuff; it was on the menu at Fawlty Towers. Brown Windsor Soup. But who has eaten it in the last 30 years? Thickened with - the horror - flour, a stomach-filler rather than a starter (curse central-heating for reducing our calorific needs) it doesnt really fit the bill these days  you cant imagine it ever being topped with a coffee foam.
As with so many soups begin with a chopped onion frying gently in butter; add a finely diced carrot and leek (the finer you chop the easier you get the right final consistency); followed by (for four) at least half a pound, preferably three-quarters, of braising or stewing steak in small cubes which should brown all over. If you have leftover braised beef (not roast) from another dish it can be used  no need to brown it  here. Add another small knob of butter and a tablespoon of plain flour and stir to incorporate the flour before adding two pints or so of hot beef stock, preferably home-made with browned bones and plenty of depth. Bring to the boil and simmer gently for 90 minutes  not perhaps the several hours that would originally have been the case. Cooking over liquidise it in a processor or with a stick-blender, rub through a sieve, and re-liquidise any remaining lumps with a bit of the sieved soup. Correct the seasoning.
At the table add a dessert-spoonful of sherry or Madeira per bowl for a nice pre-war flourish. Some recipes call for saving a few cubes of meat to add to the soup before serving, but Brown Windsor Soup of the 1970s had one texture only, that of quicksand. Meaty, rich, filling quicksand.
This is a recipe on which tunes can be played, though they should be suitable for tea dances. A parsnip instead of the carrot or leek, or as well as; a bouquet garni (remove before blending!); even a stick of celery or two, stripped of strings and finely chopped. But no garlic, which hadnt been invented in most of Britain when this last featured on hotel menus. No chili ditto. You could risk a dash of Hendersons, Worcestershire sauce or Mushroom ketchup before simmering, you mad impulsive thing.