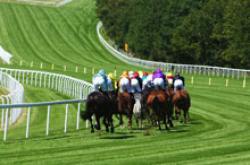 
As with its rather more formal sister event Royal Ascot earlier in The Season, it is a moot point whether Glorious Goodwood is more of a race meeting or a fashionable social gathering. Ascot so legend would have it was founded by Queen Anne early in the 18th century whereas Goodwood can trace its origins to the establishment of a course on the Duke of Richmonds Goodwood Estate north of Chichester in 1801.
The meeting encompasses five days of flat racing (the fourth being Ladies Day), including two Group One events: the Sussex Stakes (established in 1841) for thoroughbreds three years or more old and the Nassau Stakes for thoroughbred fillies and mares (first run in 1840).
Something of the gentlemanly amateur remains about the course with its lengthy straight and sharply curved turning loop, an air not hindered by the backdrop of the Downs and Goodwood House, and the occasional coastal mist, though it is of course these days a highly professional meeting with excellent facilities.
But enough of the racing, Goodwood is Glorious because of the fashion, the atmosphere and the style. Late July or early August in Sussex hopefully means some hot and sunny spells, time for gentlemen to wear linen suits and sporty Panamas, and the ladies to don summer dresses and shading hats. Indeed the dress code for the posh Richmond Enclosure insists on hats for the gels and jacket and tie or cravat (or polo neck shirt) for the chaps. Though some areas are less formally informal, dont even think about coming shirtless or in shorts or jeans, or heaven forefend fancy dress. Darling, really, there are limits.