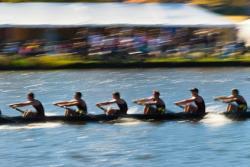 
The bitter rivalry between Englands two most historic Universities dates back to the very establishment of Cambridge University by renegade Oxford professors. It is manifested in many ways, including a whole range of sporting contests. None is more famous than the boat race which is renowned all over the world. The annual boat race takes place on the River Thames and is the best known of all the Varsity challenges between the two universities.

The Boat Race was the idea of two former Harrow pupils; Charles Merivale (by then a Cambridge student) and Charles Wordsworth (nephew of the poet William Wordsworth and at the time a student at Oxford). On March 12, 1829 Cambridge challenged Oxford to the first Boat Race, starting a tradition that continues to this day. The losing side traditionally challenges the winners to next years rematch. From these humble beginnings, an international spectacle has evolved. Nowadays on race day a quarter of a million people crowd the banks of the River Thames and are joined by millions watching at home on the television.

The first race ended with a victory for Oxford, but Cambridge got their revenge with winning streak that started the next year and lasted for four races. The course has changed since those early races. The two crews argued back in the early years as they tried to decide between holding the race in London or at Henley . London was established as the venue, however, and the course as we know it today was agreed upon on. The crews have to row a total of about 4.25 miles, which when done at race pace takes around 17 minutes. The competitive nature of the race and the difficult conditions presented by the River Thames all conspire to ensure that they are all completely mentally and physically exhausted by time the reach the finish line.

In recent years, the university crews have included many top class rowers from around the world. The World Champion stern pair of Germans Thorsten Engelmann and Sebastian Schulte, together with Olympic Gold medalist Kieran West MBE and Tom James , another GB medal winner, all appeared in the 2007 Cambridge crew. Both universities take the race extremely seriously and a great deal of time, effort and money goes into preparing for the event. All that effort is then concentrated into just 17 gruelling minutes each year as the eight-man teams battle it out on the River Thames.