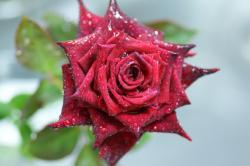 
The rose is many things for the English: symbol, passion, descriptor of an ideal beauty, the sine qua non of gardens from cottages (the cottage itself must have roses around its porch) to stately homes. Such is our fixation with the flower that we even managed to name a long running civil war on it, the legend being that the houses of York and Lancaster identified themselves and their adherents by the white and red roses respectively. Today any sporting clash between teams from the two counties is inevitably described as a roses fixture.
But it is with beauty rather than war that we most associate the rose, specifically using the phrase English Rose to describe a certain sort of beauty: fine features, pale skin, a brunette with naturally wavy hair, her eyes dark and wide, mouth forever smiling or laughing. Each generation has its prime examples: Elizabeth Taylor , Princess Margaret , Emma Thompson , and Alice Eve just four who would qualify for the epithet.
The rose has also won a firm place in our national customs. In Lancashire and Cheshire fetes and festivals still often require the crowning of a rose queen; in London there is a delightful annual ceremony on Midsummers Eve involving the payment of one red rose to the Lord Mayor for a footbridge that no longer exists; and every August 1 various regiments of the British Army including the Suffolk, the Kings Own Yorkshire Light Infantry, and the Royal Hampshire wear roses to celebrate their part in the 1759 Battle of Minden where they decorated their hats with roses as they marched at the enemy.
Equally institutional is our tradition of naming roses for famous people: some linked to fleeting celebrities are soon forgotten, but those for great figures like William Morris , Shakespeare and Chaucer will perhaps endure, as surely will our national obsession with the flower itself.