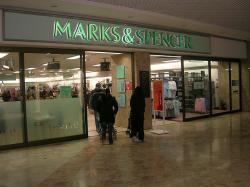 The internationally famous chain store, Marks and Spencer, was founded by Michael Marks, a Belarusian Jew from Slonim, now in Belarus, and Thomas Spencer, a cashier from Yorkshire. When Marks first arrived in England he worked at Barran in Leeds , a company which employed refugees. In 1884 Marks met Isaac Dewhurst, who owned a warehouse in Leeds. This meeting led to Marks opening his own stall on Kirkgate Market , in Leeds. Michael Marks continued to establish market stalls in many locations around the North West of England up until 1894, when Thomas Spencer invested in Marks' activities and they opened a shop in partnership, at 20, Cheetham Hill Road, Manchester .

Since those early days Marks and Spencer, or Marks and Sparks as it is colloquially known, has become one of the most recognisable British brands throughout the world. The name Marks and Spencer has tried to align itself with quality, often at the expense of economy! The company has expanded into many countries, some with notable success - such as the largest M&S store located outside the UK opened in Dubai Festival City. Other ventures, such as the attempt to establish a chain in Canada, were not so successful. Marks and Spencer closed their operations in Canada in 1999 after failing to gain real traction outside of the British ex-pat population.

In recent years Marks and Spencer allowed their crown to slip. The 1990s saw difficult trading conditions and M&S struggled to move with the times - both operationally and in stock lines. During that decade the company's share price fell by more than two thirds, while its profits fell from more than a billion pounds in 1997 and 1998 to just £145 million in the year ended 31 March 2001. This was a shock to both the company and the British public and it seemed, for a while, that this particular national institution was doomed.

The new millennium heralded many changes at M&S, not least among them the decision to finally accept credit cards other than their own store card. The company ditched many of its UK-based suppliers, local production costs had risen to the point that UK-produced clothing was simply no longer viable. The company fought off a takeover bid from the Arcadia Group in 2004. A concerted effort to turn the business around seems to have worked and M&S ended the last decade in fighting form, having regained its former place as one of the nations favourite retailers.