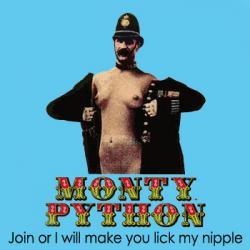 
If we subject our national culture to the American test  what will the average US citizen think of in that regard  Monty Python is in the top rank of internationally acknowledged British institutions. And it is an enduring institution, doubtless to the annoyance of John Cleese , Eric Idle , Michael Palin et al who will forever have the tag ex-Python attached to their name, whatever else they have achieved or do achieve in the future. They shouldnt complain, any British comedian more than vaguely odd will be called Pythonesque.
The show first aired on October 5 1969 , when one of its great rivals would have been On the Buses, about as far from Python as its possible to get. Yet it was rooted in two existing strands of British comedy  the varsity-bred humour of Peter Cook and Dudley Moore, Alan Bennett and Jonathan Miller, and the near madness of Spike Milligan and the Goons.
But tracing humours origins is rather less interesting than enjoying the jokes themselves. With that first programme, for no reason entitled Whither Canada, we were treated to the delights of Arthur Two-Sheds Jackson, the joke being the very dullness; and The Funniest Joke in the World, at once satirising warfare, weaponry and national stereotypes  and being funny.
While Pythons 45 episodes ran (and re-ran) school playgrounds rang with kids (ok, boys) repeating sketches and wondering why they were not as funny as last nights show. It was because they were not then original, and those kids (I am Spartacus) did not have the comedic talent of the performers.
So much of the show has entered our national vocabulary. We pretty much all understand and use these phrases: The Ministry of Funny Walks; And Now for Something Completely Different; Im a Lumberjack and Im OK; Nudge Nudge, Wink Wink; This is an ex-Parrot; Nobody Expects the Spanish Inquisition. I could go on, and did.
Unlike some flames that burn brightly and briefly, Python had legs, yielding four TV series  the last ending in 1974, and various films including the equally influential  and funny and irreverent, and profitable  Life of Brian . Its principal members, with the sad exception of Graham Chapman who died in 1989, have gone on to equally great things: Terry Gilliam made Time Bandits and many more films, becoming an auteur; Michael Palin is a national treasure famed for his travelogues; John Cleese made some funny films and wrote some deliberately unfunny books; Terry Jones has brought medieval history to life in books and TV programmes; and Eric Idle gave us, and his bank manager, the hugely successful Spamalot. Our culture would have been far less rich without them.