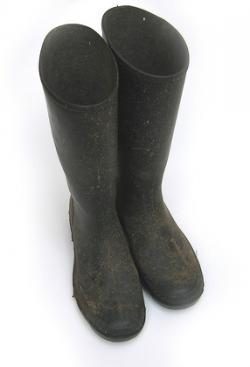 
If one piece of footwear could sum up British society it would be the Wellington Boot, a true national institution.
It was indeed the Duke of Wellington who originated the design, getting his cobbler to create a shorter version of standard leather cavalry boots. His idea was to have footwear that would serve in battle and be comfortable for social occasions. With Wellingtons eternal fame assured by the victory at Waterloo in 1815, the aristocracy adopted his boot as a fashion statement for the next 30 years and more.
After the vulcanizing process was developed in the USA such boots began to be made in rubber, far cheaper than leather. This version rapidly became popular with farm-workers as it kept feet dry and warm in bad weather. For the same reasons the rubber boot was invaluable in WWI , when the British Army sourced more than 1 million pairs, though such were the appalling conditions that trench-foot still hit many thousands.
Later in the 20th century different types of welly identified wearers with different social groups: the green welly brigade were the Range Rover-driving county gentlefolk (the Queen often spotted similarly shod), and soon their imitators; black wellies for the workers of the world on building sites and farms again; in the 1960s and onwards wellies decorated with flowers were modish for some rock festival attendees; and from the 1980s operatives - as opposed to workers - in hi-tech clean-rooms donned white versions.
Celebrated in song by Billy Connolly in the 1970s, the welly is part of our culture. Today garishly coloured and even polka-dot designs perhaps say something about our move to a brighter world.