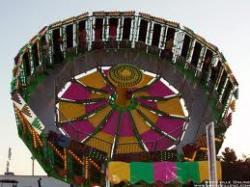 
While travelling fairs may not strike you immediately as a national institution, consider two things: many are still held on the same days as ancient trading fairs granted to towns and cities by kings from centuries ago  King John was particularly active in that regard; and they still form part of the structure of our year, something for kids to look forward to; teenagers to try and pull at; and adults to spend ridiculous sums on.
Fairs are an institution too in that they must contain certain elements to qualify. There must be a candyfloss stall; and someone selling flavourless hot-dogs sold because of the savoury smell of the accompanying fried onions. There has to be a helter-skelter ride whose operators are trained to act immediately when someone requests their car be slowed  by speeding its rotation. Dodgems are a sine qua non. And games of skill (or miraculous intervention) where a ring is thrown over an object about 1mm less in diameter; where coconuts seemingly super-glued to posts can be dislodged; or three bent and buggered darts can be thrown into a playing card: all in order to win stuff you dont really want in the first place like giant cuddly toys. Though it was a sad day when gold-fish stopped being offered as prizes, the ponds of Britain housing many survivors of the triumphant plastic bag on a stick still.
Fair people are special too, many of them apparently unaware of shampoo, clothed in jeans that make Jeremy Clarkson seem fashionable, but envied by the rest of us in steadier employment for their nomadic lifestyle and frequently for their daring as they skip across rides to collect money. Long may they and their fairs continue.