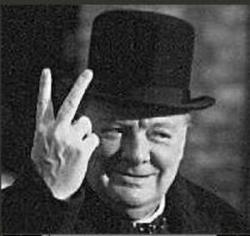 In the 20th century a symbol of British defiance grew in popularity again; the 'V' sign. Let's just be clear at this point; we are not talking about the Churchillian 'V' sign  more about that later. No, this two fingered salute is made with the back of the hand facing away from you, the opposite way to Churchill 's famous version. The stiff upper lip is often taken to be a symptom of the reserved nature of the British; an inoffensive, but stubborn way of getting the point across. The resurgence of the 'V' sign is perhaps then to be taken as showing that from the mid 20th century onwards, the Brits have become rather less reserved. The 'V' sign is literally a signal to 'go forth and multiply' and as such is a form of swearing. It is an out and out 'in
your face' way of expressing displeasure to another. It is a curt and offensive way of getting this point across.

The origins of this version of the V sign show that of the two variations, this is the most peculiar to Britain. It is believed to stem from the days of the Hundred Years War ; Britain's historic struggle against one of its traditional enemies, the French. Fearful of the damage inflicted in battle by the British Longbow men, the French would cut off the middle and index finger of any captured bowmen, so that they would not be able to fire a Longbow in future. The V sign then became popular amongst the remaining Longbow men, who would proudly display the two fingers to the French enemy; to show that they were still in one piece and ready to fire the bow. The V sign, as used by the bowmen of old, became a popular hand signal of displeasure for drivers during the Sixties and Seventies. Sadly, the British Longbow-man's double fingered salute now seems to have made way for the American style single finger gesture.

The Churchillian style V sign was used to symbolise V for Victory, it is one of the enduring images from the end of the Second World War . Despite being associated with one of Britain's most famous heroes, this version is much more universal and seems to have its origins in Asia. It is also used universally as the sign for peace and was popularised by the hippy movements in the US and UK during the 1960s and very much associated with the 'Ban the Bomb' movement.