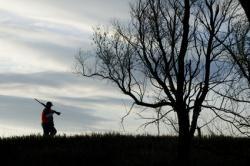 
You have to feel sorry for birds like the grouse family. Plump and juicy and not the and most agile of birds on land; they do make rather easy prey for predators of all kinds. These factors also contribute to the fact that they are one of the most popular birds for game shooting. They are, however, very fast in flight and therefore require a fair degree of skill from the shooter. This challenging aspect is another factor in their popularity as game birds.

There are many types of grouse around the world and a good variety of these species are found within the British Isles. They tend to inhabit moorland territories, the open spaces making them even more suitable to being hunted with shotguns.

Hunting has always been a large part of British culture and with the advent of more accurate guns during the 18th and 19th centuries, the popularity of grouse and other game bird shooting increased.

Grouse shooting is often associated with Scotland and the Yorkshire Moors , although the grouse populations stretch right down to the south west of Britain. The grouse population is under threat in the British Isles, but paradoxically it is most at threat where the bird is not actively hunted. This is due to the fact that fans of the sport actively support the population with breeding programmes complete with active disease and pest control in order to create enough of a local surplus for the shoots.

Flat caps, Tweeds and Wellies are the typical attire of the modern grouse hunter. The deerstalker and the plus fours now belong to a bygone age, but nonetheless can still to be seen on the more traditionalist grouse shooter. Dogs are used to track the downed birds, which may of course land some distance from the shooter and be tough to spot on the wild moor lands. Beaters will scour the land ahead of the shotguns beating the ground with sticks to rouse the birds to flight.

The Scottish Grouse shooting season runs from 12th August to the end of September. The opening day of the grouse season on August 12th, or the Glorious Twelfth as it is known, is probably the busiest of the shooting year and a great number of birds are shot on that day each year. It is important to keep the shooting season within tight boundaries, so that breeding is not affected and the stock of birds can recover and flourish from one year to the next. In some years the season may be extended in some areas if it can be seen that the population is sufficient to support it.