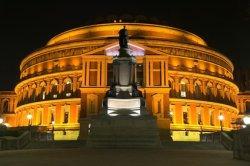 The last Night at the Proms is the world famous closing night of the The Proms. The season it brings to an end is also known as The BBC Proms or, to give it its official title: The Henry Wood Promenade Concerts presented by the BBC. The proms were originally founded in 1895. They are an eight-week summer season of daily orchestral classical music concerts and other events held annually, predominantly in the Royal Albert Hall in South Kensington, London . Each year over 70 concerts are held in the Albert Hall, as well as a series of chamber concerts at Cadogan Hall . Additional Proms in the Park events are held all across the United Kingdom on the last night. There are also a number of associated educational events. In 2009 the total number of all these concerts combined reached 100 for the first time in the events long history.

The word Proms is short for promenade concert. The term arose from the original practice of audience members promenading, or literally walking around, in designated areas of the concert hall during the performances. The tradition of Promming is still an integral part of the the festival and the organisers release tickets for the over 1000 standing places available at each concert. The Promming area is usually set aside in the central arena in a similar style to the groundlings situated in the pit at Shakespeare's Globe . Other standing areas are sometimes made available high in the hall's gallery. Promming tickets cost the same for all concerts (£5 as of 2008), providing a considerably cheaper option for the more popular events. The tickets are not sold in advance so provide a last chance opportunity to get into otherwise sold-out concerts.

The Last Night at the Proms is a British institution. The concert and all its glory is now beamed live into cinemas around the world via satellite. The finale to the annual series of Proms, complete with its patriotic renditions of Land of Hope and Glory and Rule Britannia, is now watched live on big screens countries such as Canada and Australia and parts of Asia. Nothing, of course, can beat the thrill of actually being there Promming. The heady mix of high culture, patriotism and hedonism that is the Last Night at the Proms has a strong allure that will continue to draw in the revelers from far and wide for many years to come.