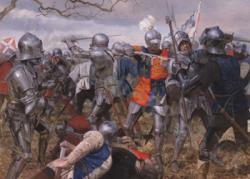 The Battle of Wakefield on December 30th 1460 was one of the most decisive of the Wars of the Roses , and the clearest example possible of intelligence rather than courage being key for a military leader.

Henry VI , mentally unstable but with a wife  Margaret of Anjou  determined to keep the throne for her son, had signed away the throne to Richard Duke of York after his capture at the Battle of Northampton . York was to become king on Henrys death. Margaret rallied a huge force and headed to Yorkshire to encounter Richard.

With Christmas approaching Richard took residence with his forces at Sandal Castle near Wakefield. Here they made merry, rapidly depleting supplies to the extent that on December 30th a foraging party had to be despatched. This was promptly beaten back by the Lancastrians.

Richard, knowing his army of 5,000 was outnumbered four to one, and that he had reinforcements on the way, still decided to venture forth and attack his waiting enemies, against all counsel. A gallant charge down the hill from Sandal castle was to no avail, the cannier Lancastrians having hidden forces - the Earl of Wiltshires foot-soldiers and Lord Rosses cavalry - in ambush either side of the fortress. It is possible too that Baron Neville de Raby by falsely riding under Yorks colours made him think help had arrived.

The Yorkists not slaughtered in the first engagement quickly surrendered. Richard of York was already dead. His son the Duke of Rutland was captured and immediately stabbed through the heart by Lord Clifford of Skipton. Within hours the brave but rash Duke Richards severed head was displayed above Micklegate Bar in York .