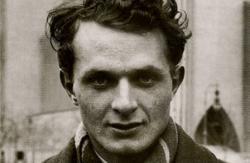 
Educated at University College, Oxford. Left wing views. Much of his poetry relived his experiences in Spanish Civil War and WWII including Poems from Spain (1939), Poems of Dedication (1941) and Edge of Darkness (1949). Later work included The Year of the Young Rebels (1969) and The Thirties and After (1978).

Contributors: Do you have a site related to Stephen Spender?
Supply some content for this page and we will gladly add a link to your site. Email here.