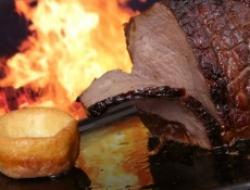 These are strange days for dinner tables across the length and breadth of Britain. According to the sort unofficial culinary census that helps Channel Four fill that awkward slot left vacant when Hugh Fearnley Whittingstall toddles off to tend to his onion patch, Chicken tikka massala has usurped fish and chips as Great Britains favourite dish. Hurrah for the curry cobbled together for our reserved palate, you may say. But while chicken tikka massala may be enjoying a moments triumph, reflecting in its own neon-glow, surely it has a long way to go before it can be considered Britains favourite meal. Its debatable enough whether most Britons would choose to dine on Day-Glo curry rather than gorge themselves on battered cod and chips. But surely on a Sunday afternoon, with the family corralled round the dining table, ravenous, impatiently so, and waiting for the gravy to be ready, the Sunday roast must surely be Britains most cherished meal of the week. In the insignificant rasps of playground strength culinary xenophobia, the French regard the Brits as the roast beefs; surely indicative that, in the worlds eyes, we Brits roast a mammoth lump of meat like no other country on Earth. While some of us know the odd vandal with a roasting tin, perhaps a scatterbrained auntie who should have surrendered the apron and donned tools in a tannery, there can be few more satisfying mealtimes than those happy Sundays spent eating a roast beef, lamb, chicken, pork or even goose. The traditional Sunday roast harks back to the Edwardian Period, La Belle Époque. A time of discovery under a gregarious monarch, Britain, becoming progressively more wealthy as it harvested the toil of a rapidly industrialised economy, had worked up an appetite. It was the most important meal of the week. It was, and still is, the time for the family to eat together and wrestle over the last roast potato. Part of the Sunday roasts charm is its ease of preparation. With a roasting tin, a good joint of meat and a clutch of seasonal vegetables the best meal of the week is easily prepared over a leisurely couple of hours. There are a few things to be mindful of when preparing a good Sunday roast. Most importantly, the meat has to be of good quality: buy the best joint you can afford. If youre buying beef, a good rib joint, on-the-bone, is always a fail-safe winner. Partner with a henge of golden Yorkshire puddings and a litter of roast potatoes and whatever veg will fit on the plate and the archetypal roast is complete. Gravy is easy, too, just scrape the bottom of the roasting tin, throw on some plain flour and add some water or red wine and stir vigorously: the lumps will come out. There are certain notes of caution: dont keep opening the oven door when the meat is cooking and be sure to let it rest in a warm place for up to half-an-hour before carving  which gives you plenty of time to concentrate on the spuds. Oh, and let dad carve; itll reinvigorate the hunter-gatherer in him. With uneven cuts of meat, an odd number of potatoes, that Great British institution, the Sunday roast, will never lose its appeal.