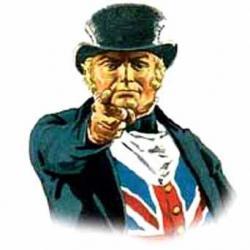 John Bull was created in 1712 by a cartoonist called Dr John Arbuthnot. He is intended as a personification of Great Britain as a nation, but is more commonly accepted as a personification of the nation of England. This is due in part to the fact that many in Scotland, Wales and Northern Ireland (mainly amongst the Nationalist element), do not accept John Bull as representative of anything other than England.
There may be deeper reasons for this than anything to do with the character himself. Historical rivalries with England have left some entrenched mistrust amongst the other nations in the British Isles; but it is possible that the characteristics generally shown in portrayals of the John Bull character have peculiarly English leanings.

Arbuthnot, himself a Scotsman, introduced the Bull character as a typical Englishman. He wore a Union Jack waistcoat and was often accompanied by a bulldog. Whilst these are both British symbols, it is not uncommon for them to be used by those with a more English view of Britain. John Bull was portrayed as a lover of roast beef , another traditional English trait, which might also help to explain the rather portly manner of his appearance! His attitudes were also very much aligned to a traditional English, and not necessarily British, set of ideals. Full of bad tempered frustration and good old fashioned common sense, Bull was a keen drinker whose well rounded figure hinted that he was successful and prosperous. He rejected intellectualism, in favour of a more blunt no nonsense way of thinking. He was more straight-talking Yorkshireman than airy fairy Londoner.

Whilst still holding the affection of many, the John Bull character has definitely declined in popularity during the 20th and early 21st centuries. As early as World War I he was seen as not being representative of ordinary Britain and was being challenged strongly by the character of the British Tommy (Tommy Atkins). During the latter part of the twentieth century much of the imagery associated with John Bull, such as the bulldog and the Union Jack were seen to be hijacked by right wing political movements. This has undoubtedly hastened the decline in popularity of the figure. Ironically the figure of John Bull was still popularly used in British propaganda during the fight against the Nazis in World War II . Indeed, one could easily draw parallels with the stern and portly figure cut by Sir Winston Churchill in World War II propaganda photos and World War I images of John Bull used in recruitment posters.