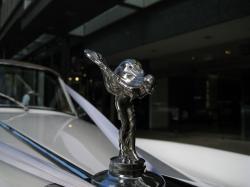 The name Rolls-Royce is synonymous with quality and Britishness. Rolls-Royce was originally founded in 1906 when Henry Royce and Charles Rolls formed a business partnership to produce motorcars. Royce was already producing cars when the pair met. Rolls was an established motor dealer so the partnership was a natural one. The company diversified into manufacturing aero-engines at the start of the First World War (1914).

The cars were always aimed at the luxury market, a philosophy that the various guises of the motor company have adhered to throughout its more than 100 year history. The result is that the Rolls-Royce motor car is forever linked to wealth and privilege, and of course unabated luxury. The name Rolls-Royce has even become a word used to describe something thats the ultimate in its class, such as an Aga is the Rolls-Royce of cookers.

The companys activities in aeroplane engines helped to cement the firms reputation for innovation, power and Britishness. Around half the engines used by the allies in World War One were built by Rolls-Royce. The use of the mighty Merlin engine in the Hurricanes and Spitfire fighters during World War Two gave the name Rolls-Royce a deeply patriotic and heroic association that the company has been keen to trade on ever since. The fire breathing liquid-cooled, 27-litre, V-12 piston aero engine gave the British fighters an edge they relied upon to meet the threat of the far more numerous German Luftwaffe aircraft in the skies during the Battle of Britain . The engine was also widely used in bomber aircraft and almost 150,000 engines had been delivered by 1950. The engine was also produced in the USA during the war for use in USAF aeroplanes. The Rolls-Royce Merlin engine played a significant part in Britains resisting German invasion, and thus the eventual Allied defeat of the Nazi threat completely.

The immediate post war years were good for the Rolls-Royce company. Its cars continued to be the watchword for luxury and were often the first choice for millionaires, heads of state and film stars the world over. Meanwhile its aero-engines dominated the skies. Unfortunately the company hit rocky times in the 1970s and the car division was separated from the business and sold off. After years of mixed fortunes, the rights to produce Rolls-Royce cars was purchased by BMW who continue to develop and produce the ultra-luxurious marque. The aircraft business only just survived some of its worst financial scares. However, it managed to stay in business and their engines continue to power aircraft, both military and commercial, the world over.