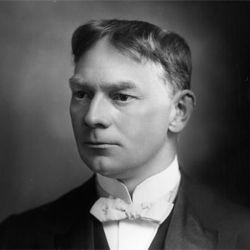 'Think of the man who first tas'... More

For generations of Britons the comic masterpiece Three Men in a Boat has provided both belly-laughs and thoughtful contemplation.
Those only acquainted with Jerome via Three Men in a Boat with its genteel style and gentlemanly preoccupations but knowing nothing of his life might imagine him the second son of a wealthy family perhaps. But in fact his early life was one of poverty, and into his twenties he was a homeless rootless pauper.
His father was a non-conformist preacher and farmer forced to move from Devon by one business disaster, then in Walsall losing the rest of the family fortune in another in the year Jerome K Jerome (originally Jerome Clapp Jerome, changed to a more intriguing Jerome Klapka Jerome later in life) was born, in 1859. A move to Stourbridge followed, then to Poplar where the family struggled until Jerome senior died.
The future author worked from age 13 for a railway company. At 18 he tried acting, with no great success, leaving his ramshackle company to try his hand at other pursuits: hack journalism; teaching; builders clerk; packer. He wrote whenever time allowed, and was regularly rejected by editors until he wrote the story of his brief acting career  On the Stage and Off  a minor hit when it was finally accepted and serialised by a magazine (The Play) in 1885. As well as being biographical it is amusing: Jerome had found his voice.
Idle Thoughts of an Idle Fellow followed in 1886, his laconic style taking a further step forward. In 1888 he married nine days after his wife-to-be got divorced, and their honeymoon boating on the Thames gave him the idea for his masterwork, which duly appeared in 1889.
Three Men in a Boat was a huge success, and Jerome was set for life. The antics and musings of J, George, Harris (and Montmorency the dog) are timeless: Jeromes explanation of fishing tales; struggles with a tin of pineapple; packing for a holiday; but among them too the tragic suicide of a ruined woman. Though Three Men on the Bummel in 1902, with the same three characters cycling in Germany, was successful without nearing the brilliance of its forerunner.
Too old to fight in WWI Jerome joined the French army as an ambulance driver, a shattering experience. He died on June 14 1927 while motoring in England with his wife.

Contributors: Do you have a site related to Jerome K Jerome?
Supply some content for this page and we will gladly add a link to your site. Email here.