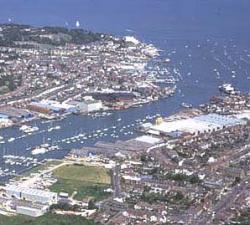 
The debutantes and society balls aspect of the season some time ago. The sporting events  Royal Ascot , Wimbledon , the Henley Royal Regatta , and Glorious Goodwood among them - which gave it structure still continue, however, and one of the most significant is Cowes Week in August, a yachting regatta centred on Cowes on the Isle of Wight . Cowes puts the full stop to the summer social calendar of activities in London and the South, as after its fireworks finale the wealthy head for Scotland and the North to slaughter red grouse on the Glorious Twelfth .
It was in 1826 that the first Cowes Week took place, George IV having given yachting the royal seal of approval since his days as Prince Regent, and The Royal Yacht Club (which evolved into The Royal Yacht Squadron) oversaw the races and provided the prizes. In those days the boats raced were all of a considerable size, with skipper and crew to obviate the need for tedious hard work by the owners.
Perhaps it is a sign of more demotic times that over the decades, particularly since WWII , classes for far smaller craft have been added to the list of races, which now sees more than 30 starts a day over the week. It is certainly a sign of social change that sponsorship by industrial and financial concerns has become vital to Cowes; and perhaps also that where public inebriation during such gatherings was once social death it is now all too frequently reported on.
Cowes remained a rather private affair until the 1970s, with the small town providing a discreet setting for parties, and the races on the Solent all but out of sight of the rest of the world. Edward Heath s participation (and successful participation at that) in the Admirals Cup in that decade brought the event to public attention.
If the marrying-off aspect of the season has largely gone, the networking continues, and again it says much of the modern world that Cowes is now far more international  those at the top of our national power-pyramid building ties with their counterparts in New York (whose own yacht club presented one of the major trophies in 1951) and similar centres.