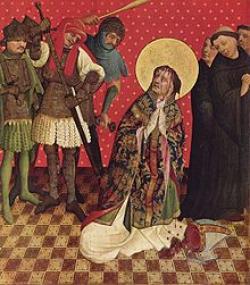 Historians are divided on the nature of Thomas à Becket , or more properly it seems Thomas Becket, the à being a later addition to his name. The church and some others argue he was the great martyr standing up for the clergy against a king seeking to reduce its power and empty its coffers. Another viewpoint has him as making a play for personal power, a self-centred man unable to deal diplomatically with the political pressures his office inevitably encountered. There are even concerns about his handling of the riches that went through his hands as Chancellor, his ostentation while travelling on his duties reflecting huge personal wealth.

Thomas was born in 1118 to a family of merchants of French origin. Though not aristocratic he was well connected, and it is likely his father was Sheriff of London at one time. Educated first at Merton Priory, then in Paris, Bologna and Auxerre, Thomas rose inexorably, first in the household of Richer de lAigle, then as the employee of Theobald the Archbishop of Canterbury for whom he undertook various sensitive commissions overseas. Thomas was made Archdeacon of Canterbury and Provost of Beverley by Theobald, though he was not ordained for several more years.

When the post of Lord Chancellor became open the young Henry II appointed the capable Becket, and his choice was well rewarded as the new appointee supervised tax collection from laity and clergy with great zeal. Thomas was highly thought of by Henry, who entrusted him with the care and upbringing of the heir to the throne.

Legend has it that when Theobald died in 1161 Thomas warned Henry not to appoint him in his stead, as the church rather than crown would be his new master. Henry ignored this, and lived to regret it. Thomas was hastily ordained and then made a bishop the following morning, and archbishop later the same day. Thomas resisted the crowns attempts in 1163 to impose greater authority on the clergy by removing the right for clerics to be tried for their crimes before a church court.

Relations between King and Archbishop deteriorated to such an extent that Thomas fled into exile in France for six years, pressuring the Pope to excommunicate Henry and even the entirety of England. Several key church supporters of the king were indeed excommunicated.

With Pope Alexander about to expel Henry from the church a compromise was supposedly reached, and Thomas in November 1170 returned to Canterbury. But Beckets refusal to remove the taint of excommunication from the Bishops of London and Salisbury led the King to anger against him once more.

There are a myriad variations on the words said to have been uttered to his courtiers by an exasperated Henry, but the best known version is: Who will rid me of this turbulent priest? Whether this was a deliberate demand for action or merely a cry of frustration was debated afterwards, but four knights took it at face value and travelled from Henrys base in France to Kent.

On the evening of 29th December 1170 the four assassins  Richard le Breton, Reginald Fitznurse, William de Tracey and Hugh de Moreville  cornered Becket in Canterbury Cathedral . There were several witnesses to the attack who related how Thomas faced his attackers with dignity, commending his soul to god. The knights hacked at the prelate until one sliced the top of his head open. They fled the bloody scene with their job done.

Henry lost prestige throughout Europe because of the attack, and faced a rebellion three years later with some of his people having lost faith in him. Thomas was made a saint in 1173, and Henry was forced by circumstances to do penance at his tomb in the summer of 1174, a tomb that became a shrine and place of pilgrimage for the English and even for those from other kingdoms.