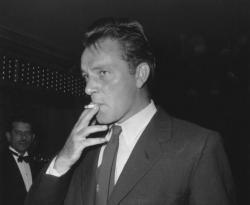 'You may be as vicious about me'... More

Richard Burton was born November 10th 1925 and died August 5th 1984. He was an award-winning Welsh actor, famous for his distinctive and memorable voice. Burton was born Richard Walter Jenkins in the village of Pontrhydyfen in Wales, the twelfth of thirteen children to 'Dic', a hard drinking, gambling, coal miner and his wife Edith, who died after the birth of her last child when Burton was 2 years old. In 1927 his sister Cecilia and her husband took him into their family in nearby Port Talbot, where he was raised a Presbyterian and remained for many years. He was also very close to an older brother, Ifor, 19 years his senior, who later became his personal assistant. He went to the local grammar school where he displayed a talent in English and Welsh literature and excelled at sports. At an early age he showed an excellent speaking and singing voice with a natural gift for reading and reciting poetry and Shakespeare. Encouraged by his schoolmaster, Philip Burton, he participated in many school productions. He left school aged 16, and joined the Air Training Corps as a cadet where Philip Burton, his former teacher, was the commander. Philip Burton had great faith in Richard's talent and adopted him as his ward. Richard returned to school and was tutored intensely until he was allowed to enter Exeter College, Oxford for a special term of 6 months study. He eventually served in the RAF between 1944-1947 as a navigator. He made his professional acting debut in Liverpool and London, appearing in 'Druid's Rest' and narrating radio parts for the BBC - something he continued to do for the rest of his life. After his discharge from the RAF in 1947, Burton appeared in his first film, 'The Last Days of Dolwyn' where he met his first wife, actress Sybil Williams. They married in 1949 and had 2 daughters, but divorced in 1963, after Burton's widely reported affair with Elizabeth Taylor. During the time he was married to Sybil, Burton appeared on stage in the West End, as well as in seasons at Stratford, performing Shakespeare. He had small parts in various British films, and reviewers began to notice his leading man qualities. In 1952 he launched his Hollywood career, landing the leading role as recommended by Daphne du Maurier in the film adaptation of her novel, 'My Cousin Rachel'. The film was a critical success and established Burton as a Hollywood star, winning him his first Academy Award nomination and the Golden Globe Award for New Star of the Year. In 1954 he appeared in 'The Robe', winning him his second Oscar nomination. Burton received a total of 7 Oscar nominations, never actually winning any. He juggled his Hollywood film career with theatre, appearing frequently at the Old Vic in London, and in productions on Broadway, including the hit show, 'Camelot', winning him a Tony award. He then put his stage career on hold to concentrate on Hollywood again and moved to Switzerland with Sybil in 1957. The film that was the start of his most successful period in Hollywood was 'Cleopatra' in 1963, the most expensive movie ever made up until then. During the filming, Burton met and fell in love with Elizabeth Taylor, and the Taylor-Burton association ensured that the film was a great success, with the couple becoming two of the hottest stars in Hollywood and enjoying a jet-set lifestyle much followed by the press. When the couple married in 1964, it was the start of a series of on-screen collaborations which most famously included, 'Who's Afraid of Virginia Woolf', with the acting relationship between them being likened to their real-life marriage. Burton and Taylor were married twice consecutively, between March 1964 to June 1974 and again in October 1975 until July 1976. In 1964 he appeared in John Gielgud's, 'Hamlet' on Broadway, holding the record for the longest running play in Broadway history. Burton's Hollywood career enjoyed commercial success in 1968 when he starred alongside Clint Eastwood in 'Where Eagles Dare', and began charging $1 million per film . He was awarded a CBE in 1970. Burton's much documented struggle with alcohol took a turn for the worse after his brother Ifor died in 1972. He was critically acclaimed for 'Under Milk Wood' in 1971, and reprising his original stage role for the film, 'Equus' in 1977, during which he met Susan Hunt whom he married in 1976. They divorced in 1982 when he took the title role on the film epic, 'Wagner' where he met production assistant, Sally Hay. The couple married in 1983 during Burton's rehearsals for Noel Coward's Broadway production of 'Private Lives', in which he starred alongside ex-wife Elizabeth Taylor. In 1984 he seemed in good shape, having completed the film adaptation of George Orwell's '1984' and preparing for 'Wild Geese II', but on 5th August that year he died suddenly of a cerebral haemorrhage in Geneva, Switzerland. He was buried in a red suit, a tribute to his Welsh roots, along with a copy of the Collected Poems of his friend, Dylan Thomas.

Contributors: Do you have a site related to Richard Burton?
Supply some content for this page and we will gladly add a link to your site. Email here.