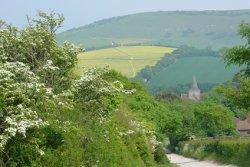 After decades of delays the South Downs have finally been added to Britains list of protected and promoted national parks. Celebrate the designation with a trip there this May, probably the best time of year to visit.

The boundaries circumspectly leave towns like Brighton, Bognor, Southampton and Worthing outside the area with its wolfs head profile: stretched neck near Eastbourne, nose touching Winchester, ears at Alton and Binsted and tongue lapping Wickham. The 628 square miles are home to about 110,000 people, but given the majority of those reside in Lewes, Arundel, Petersfield, Liss, Midhurst and Winchesters eastern edge that leaves a lot of glorious open and empty country in-between.

While the South Downs National Park has only existed as such since April 2011, the geology and geography that make the area special have been around for millions of years. Or is it more accurate to say geologies? There are, after all, two distinct landscapes within the new park: the chalky downs of rolling hills and dry valleys (and the dramatic cliffs of Beachy Head and the Seven Sisters); along with the often dense woodlands thriving on the sand and clay of the Western Weald encompassing Liss, Petworth and Midhurst.

The adventurous may fancy tackling some or all of the South Downs Way, entirely within the national park; or riding it given the route was Englands first bridleway National Trail. At certain points the view can include the Isle of Wight, and you walk in the footprints of our prehistoric ancestors via the Devils Dyke and Chanctonbury Ring.

You have time to contemplate the landscape too just siting in it fishing: the Itchen is one of the most famous fly-fishing spots in the land. Alternatively the areas valleys, woods and folds hide some of the most beautiful villages and small towns in the South of England. Alfriston is the best known, and later on in summer often the busiest, but even then merits a trip for the Clergy House alone  the first property acquired by the National Trust. Ditchling with a jumble of cottages and pretty 13th century church rivals it, with the added draw of its Bohemian tradition  Eric Gill once part of its still lively artists colony - and its fantastic setting beneath high hills. Less famous and thus quieter places like cosy Fernhurst and Bury may attract those just fancying a quiet stroll in a pretty village. And if the hugely varied architecture of the Downs and Weald fascinates you  stone, black-tiled, flint, timber-framed, thatched, clapboard... head for Singleton, whose outdoor museum has a fine collection of old buildings saved from demolition. Along with that architectural splendour youll also find one of Englands cultural treasures in the national park  Glyndebourne, whose 2011 festival opens on May 21.

The larger settlements within the park have a multitude of accommodation options. Petersfield has Langrish House with a touch of the Jane Austen about it; 16th century Mizzards Farm; and The Southdowns Country Hotel complete with pool. Midhurst boasts a hotel  The Spread Eagle - in a 14th century building; and Park House where Bertie Wooster would seem at home. Lewes of course has many fine establishments: The White Hart that combines 16th century architecture and spa facilities; Pelham House of a similar period and with the accent now on boutique styling. Alfriston has venerable Deans Place Hotel; and Arundel The Norfolk Arms in the shadow of the castle. And in Pulborough there is the thatched Roundabout Hotel.

Just about every village and hamlet has a good pub too, most offering rooms (and the beer shouldnt be forgotten either): Information Britain lists dozens, among them The Fox Goes Free in Singleton; Ye Olde George in Petersfield; Lisss Flying Bull; and The Star in Alfriston with its roots in the 13th century.

In May youll find lots of room to breathe in the Downs; whether you want that breath to be expended in tramping the chalk hills; expelled in surprise looking at Beachy Head; or just gently exhaled outside a village pub is up to you.