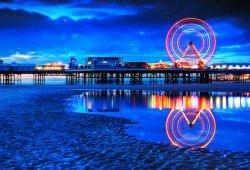 The plurally-named City of Brighton and Hove rather fittingly is a holidays  plural - destination. Its modern, historic, cultural, sporting, happening, a seaside resort and a shopping paradise, with accommodation thats equally varied. A great place to spend a summer week or just a weekend.

And of course Brighton knows how to do holidays, having had centuries of practice: in the Georgian era it was a fashionable place to take bathing cures; in Victorian and Edwardian days it was a discreet place for wealthy gentlemen to weekend with a chorus girl, while the less well-off took the air on the pier; and in the sixties it drew hordes of teenagers.

August is a great month for those of a sporting mind: the horseracing festival early in the month with other days later on; greyhound racing; and plenty of Sussex Cricket fixtures at the lovely ground. If you want something more active you can learn to sail at the Marina; or paraglide; or fly; or play beach sports at the UKs first centre dedicated to them.

For the culture-vulture Brighton offers a plethora of museums and galleries: Brighton Museum which is big on fashion; Booth Museum of Natural History; and theatres traditional and avant-garde; music at Brighton Dome; the oldest working cinema in the country in The Duke of Yorks Picturehouse...

And for the party-animal Brighton has a club-scene that some reckon is the best in Britain; brilliant bars and restaurants that reflect Brightons cultural diversity; vibrant comedy venues. And good old-fashioned pubs too.

History buff? Hit the Fishing Museum; or just stroll the Regency streets; the Royal Pavilion is a must, naturally, either a monument to bad taste or the most daring and charming architecture of its era, depending on your viewpoint; please the kids with the Toy and Model Museum and a stick of traditional Brighton Rock. Or frighten them in the interests of education with The Old Police Cells Museum. Shopaholic? The French Market makes sense; so does the weird and wonderful collection of boutiques in North Laine; or the more conventional Churchill Mall; find bargains at the Sunday boot market near the station.

Some attractions cut across several categories: Brighton Marina for a stroll, designer outlets, trendy cafes and  obviously  boats: you can learn to sail there, or arrange a motor-boat trip. Volks Electric Railway is fun to ride on and a piece of living history. Brighton Pier is another historic site that happily provides plenty of amusement. The many artists galleries are a contemporary culture experience, and the chance to buy something to hang in the hall that may one day be worth...

Information Britain has more than 100 places to stay in Brighton and Hove, so browse the site and see what takes your fancy. But for a glimpse of the range on offer there we can suggest a few to suit differing tastes and styles. Culture-Vultures and history buffs may fancy a bit of Georgian, Regency and Victorian elegance: the Royal Albion is contemporaneous with Nashs metamorphosis of the Royal Pavilion; The Old Ship offers Georgian splendour in its architecture and luxury within; the bijou Royal Pavilion Townhouse Hotel with period features aplenty.

Style-gurus may fancy Maison Mascara Boutique Hotel; One Broad Street, a decidedly chic B&B Hotel Nineteen a trendy place in a trendy place; or the ever-hip Hotel du Vin. If youre there to stroll along the prom prom prom then make it easy by booking the De Vere Grand Brighton right on the front; or  the names a clue - The Beach Hotel; how about The Cosmopolitan, on the front and on one of Brightons much-loved seafront gardens. In keeping with the diversity of the city theres the Granville Hotel, a boutique place with a variety of themed rooms; and Hotel Seattle at the Marina, combining trendy with convenient and sporting location.

These are just a few out of 111 on the site. Dip in and look around: as with the city itself, its accommodation has something for everybody.