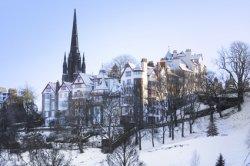 As befits a capital city, Edinburgh at Christmas  and especially at Hogmanay  is jumping with stuff to do, activities framed by historic surroundings where the atmosphere turns up as the heat goes down. Throughout December there are innumerable special events laid on, some charging, others free: so if youre thinking of dropping in on Auld Reekie heres a quick selection of some of the most interesting.

For retail therapy, everyone knows about the fine and fancy places on Princes Street, but dont miss the quirkier shops on Victoria Street. Some stores offer a glass or a mince pie to tempt you in, belying the Youll have had your tea then? slur on the capital. If you dont find one of those, treat yourself to a hot spiced punch at The Cafe Royal Circle Bar.

Strangely a British Christmas now would not be right without a continental market, and Edinburgh hosts a German version this festive period, with the Ferris Wheel nearby to amuse the kids, or for those with the knack an ice-rink on hand. On Saturdays there is a Farmers Market at Castle Terrace, plus a special one on December 23.

Christmas prompts many of us to make our annual visit to the theatre; Edinburgh may push you to do one or two more: Jack and the Beanstalk is on at the Kings Theatre (oh! no its not  oh! yes it is); The Snow Queen at the Royal Lyceum; or try the Stand Comedy Club which has a huge range of different performers tickling ribs over December. For the nostalgic of various ages, The Filmhouse has a variety of Crimble movies including  teardrop in eye already  Its a Wonderful Life.

For music its tempting to say walk about a bit and youll hear a carol concert going on. Or for Christmas lollipops the ever-reliable Raymond Gubbay organisation has The Mikado, a Strauss evening and its own Carol Concert at the Usher Hall; the same venue has loads more concerts too.

As Scotlands capital Edinburgh has extensive cultural facilities, most of which make a special effort over Christmas: the Royal Botanic Gardens and the Castles Great Hall both have packed programmes of presentations; The Scottish Storytelling Centre at 43-45 High Street doesnt miss a trick either, and not just for kids, though they will love it. And Lauriston Castle  worth a visit for the architecture and the outlook anyway  has many paying workshops to get you making your own decorations.

If all that festive stuff is getting a bit too rich, how about the surrealist exhibition at the National Gallery? Or if culture doesnt excite you, maybe the Musselburgh Races on December 23 is more your cuppa? Just dont blow the present cash.

For whisky drinkers Edinburgh is the place to be anytime: Royal Mile Whiskies is rightly celebrated for its selection; The Scotch Whisky Experience has its Platinum Whisky Treat running on five days between 10 and 19 December, entry fee £25; or take a trip to visit the Glenkinchie Distillery at Peastonbank to the east of the city. Dont forget that Edinburgh has a great brewing tradition too, with four local breweries (and Belhaven in nearby Dunbar), a good excuse to drop into a hostelry or several.

It is almost a moral obligation to frequent one of the citys pubs on Hogmanay; but there are organised parties, ceilidhs, a Son-et-Lumiere that starts at Parliament Square at 18:30, and concerts all over the city on the biggest party night of the year north of the border. Some may not be cheap, but its once a year. Information Britain lists more than 400 places to stay in and around Edinburgh  check out those pages and youre bound to find something to suit your taste and pocket.