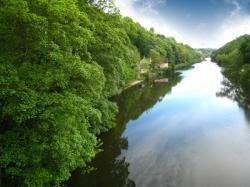 If the prospect of beautiful countryside without the danger of encountering coach-loads of tourists appeals to you, Weardale is well worth a trip. Running roughly from Killhope and Cowshill in the west to Wolsingham in the east, the dale is a ribbon cutting across about 20 miles of country, though with innumerable small lanes and by-roads leading the visitor from the valley to the fells and moors either side.

Probably the least well-known of the upland dales, Weardale can be reached easily by road  the A1 is the obvious route, the M6 only 45 minutes away too  but not so easily that youll encounter jams. When you arrive the car can be forgotten for a time: walking beside the River Wear is one of the reasons for visiting the area, and it is popular with cyclists too for its lack of traffic. A good way to explore different spots is using the remaining 6 miles of the preserved Weardale Railway (though plans are afoot to re-open further sections) between Wolsingham and Stanhope, with Frosterley between them, though in January this is restricted to Saturdays and Sundays plus New Years Day. Or take the bus and avoid designated driver arguments.

As much of the dale is part of the North Pennine Area of Outstanding Natural Beauty it is no surprise that both flora and fauna provide constant interest for the rambler. This is one of the native Red Squirrels last outposts; the higher ground with swathes of heather provides excellent habitat for grouse, snipe, golden plover and other birds. And lower down the slopes the meadows have some of Britains prettiest wild geraniums and pansies in season, but in January this year youll see snow.

The history of the district can be explored just by tramping around, but there are several places that provide a particular insight into Weardales past: Ireshopeburn has the Weardale Museum and what claims to be the worlds oldest Methodist Chapel  John Wesley visited the area frequently. And a couple of miles further west along the A689 the Killhope Lead Mining Centre recalls that industry, long gone, which once made the now agricultural area a hive of activity. The 33 foot diameter water-wheel used in crushing ore-bearing rock is a memorable sight.

With industrial sites now consigned to history the waters are clean up here, making it a favoured spot for fishing: many stretches are private, but both Northumbrian Water and the Northumbrian Environment Agency own others and sell tickets for them: there are game fish and coarse fish aplenty to be found by those with the necessary skill.

The accommodation scene in keeping with the countryside is more comfy B&Bs and self-catering cottages than anything styling itself boutique, which for those with walking boots is a relief. The cold winter weather covering the higher hills with snow has made the dale particularly lovely recently, and a good walk in the frosty air provides an excellent excuse to warm up your outside by a pub fire and your inside with some hearty local food while you think about the next hike  or pint.