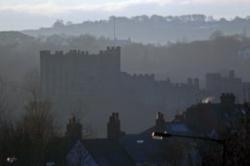 Bishop Auckland
Did you know that the church at Escomb near Bishop Auckland is the oldest church in its original form in England? It also houses the oldest sundial in Britain, marking the three most significant times of daily worship in the early Northumbrian church. The plain and, as Pevsner wrote, moving Saxon church dates from around 670AD, not long after the Synod of Whitby . As various inscriptions clearly show much of the stone for it was recycled from the nearby Roman fort at Binchester .
Darlington
Did you know that the worlds first steam-powered passenger train journey began in Darlington on 27th September 1825 ? It moved at an average of 6 mph up the line to Stockton on Tees . The railway had been intended merely to haul coal in horse-drawn wagons, but George Stephenson changed all that, strengthening the track to accommodate his new steam-driven engine, logically named Locomotion No 1, that managed to pull up to 600 passengers on that inaugural journey.
Durham
Did you know a resident of Durham, a Mrs Clements, produced the worlds first paste mustard in 1720? Her secret was grinding the mustard seed like flour, extracting the maximum flavour and pungency from it  George I gave her a patent for the tracklement.
Did you know that Durham was the first city in the UK to introduce congestion charging ? The single-track Saddler Street which had long been a bottle neck to the centre of the ancient city had a barrier system introduced in 2002.
Middleton-in-Teesdale
Did you know that High Force on the River Tees , just outside Middleton, is Britains tallest single-drop waterfall? The uninterrupted cascade from the top to the sparkling pool below is some 70 feet. The highest multi-tiered waterfall in Britain is Eas a Chual Aluinn in Sutherland , which can boast 650 feet of descending water, though at drier times it may seem more like a particularly steep stream!
Stanley
Did you know that the worlds oldest surviving railway bridge in the world is Causey Arch near Stanley? The stone structure was completed in 1726, and carried two tracks  though these were wooden versions made for horse-drawn coal trucks destined to load into boats at the River Tyne  up to 900 trucks using it daily at its peak. Legend has it that the bridges builder, Ralph Wood, was so worried the lengthy span was doomed to collapse he threw himself to his death from it.
West Auckland
Did you know that the first winners of the World Cup  sort of  were West Auckland not Uruguay? In 1910 Sir Thomas Lipton of the tea family asked the Football League for permission to recruit a professional team to play in a tournament he had arranged in Italy. He was refused, and for obscure reasons turned to West Auckland, a team made up of miners. They defeated Stuttgart and Red Star Zurich on the way to the final, where they beat Juventus 2-0 to take the Lipton World Football Trophy. At the time they were third from bottom of the Northern League. Amazingly they returned to defend the cup in 1911 and beat Juventus again in the final.
Wylam
Did you know that the small village of Wylam was the birthplace of both Timothy Hackworth and George Stephenson and is therefore the undisputed cradle of world railways? Stephensons gauge is still used the world over; and his Locomotion No. 1  on whose design Hackworth collaborated - set the standard for steam locomotives for decades. Another railway connection is that William Hedley, who designed Puffing Billy two years before Stephenson built his first effort, Blucher , attended Wylam village school.