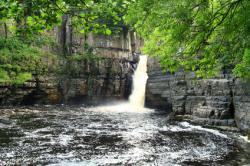 The River Tees rises at Tees Head in the North Pennines . The Pennine Way passes a patch of marshy ground that marks the source near to Cross Fell, the highest point on the walk at 2902 feet above sea level. Teesdale begins at the eastern slopes of Cross Fell where the Tees has its origin. The industrial and urban environment at the point where the Tees enters the North Sea some 85 miles further down river couldn't be more different to that of its source up in the wilds of the Pennines.

Teesdale is part of the North Pennines Area of Outstanding Natural Beauty and has been designated a geological Europark, the first in the UK. Along its course the Tees marks the traditional boundaries of County Durham and Yorkshire. It also divides the historic counties of Westmoreland and Durham .

Just seven miles downstream from the source the Tees flows into Cow Green Reservoir, a product of the river's industrial heritage. Below the reservoir the river cuts through a series of hard basaltic rocks in an area known as the Cauldron Snout . The water then falls at a point called High Force. Although the river current has tremendous force here this is not the origin of the name. Here the word 'force' is in fact an old Viking word for waterfall. High Force is partnered by a smaller waterfall known as Low Force.

The harsh Pennine scenery softens as the river descends and passes Middleton-in-Teesdale . Barnard Castle , the ancestral home of the late Queen Mother , is the next major landmark along the river's course before it continues by Egglestone Abbey and Rokeby Hall .

The valley broadens as it traverses the rich plain east and south of Darlington in sweeping curves. The river then turns north-east before it enters the industrial area known as Teesside. The major ports of Stockton-on-Tees and Middlesbrough lie on the banks of the river. Both sprung from almost nothing to become major ports during the Industrial Revolution . The river provided the water supply and transportation that was vital to the growing industries. Another port, at Teesport, was built on land reclaimed from the sea near Middlesbrough. It is now Britain's second busiest port in terms of tonnage.

On the opposite bank, right at the mouth of the river, lie the flats of Seal Sands. Before industrialisation this was home to large colonies of Common and Grey Seals. Heavy pollution of the river drove them away for a period of around 100 years. Recent improvements in water quality has seen their return and the area is now designated as the Teesmouth National Nature Reserve