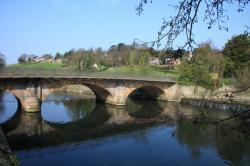 The River Derwent is a river that runs along the border between County Durham and Northumberland, in the north east of England. The name Derwent comes from the Brythonic/Early Welsh word for oak derw. Even today much of the Derwent Valley is rich in woodland. Two thousand years ago this area would have been covered in a thick blanket of ancient woodlands featuring the mighty oak and other indigenous trees. It is now an often overlooked area of the North-East that has some extremely attractive scenery and it supports a wide range of wildlife including kingfisher, dipper and otter.

The river itself is around 35 miles long and is formed by two streams meeting a mile west of Blanchland. It widens to form the Derwent Reservoir, which is to the west of Consett . The Derwent does not flow to the sea as it is a tributary of the River Tyne , which it joins near Gateshead at Derwenthaugh. The river flows through Allensford, Shotley Bridge , Blackhall Mill and Rowlands Gill.

Derwent Walk Country Park , named after the river, is at Rowlands Gill. The Derwent Walk Country Park features a mix of woodlands, meadows, wetlands, riverside and reclaimed industrial sites. These are all linked by the Derwent Walk which uses the old track-bed of the former Derwent Valley Railway. The ancient woodlands in the Derwent Valley are home to a broad spectrum of wildlife. Springtime wood anemones produce stunning carpets along with the celandines. Many species of birds, including green and great spotted woodpecker, nuthatch and sparrowhawk have made it their home. Blackcap and whitethroat can be heard singing there in summer, while bullfinches and flocks of siskins feed there in the winter. Visitors may even glimpse animals such as, fox, badger and roe deer. The flowers of the many hay meadows there support colonies of butterflies including the common blue and meadow brown.

In his book published in 1882,The Tyne and its Tributaries, W J Palmer wrote: "Near Scotswood, another meeting of waters takes place; here Tyne receives the Derwent...so beautiful a stream as the Durham Derwent deserves more extended notice on its own account, and taking train on the Consett line, we shall find much that is interesting on its banks."

Although coal mining and steel works came to the area, the Derwent still has a great deal of rural charm, and much of the industry has subsequently disappeared again. Many sites that were once dominated by man and machines have now returned to rural tranquility. The activity during the industrial revolution along the Derwent is one reason why it is crossed by many bridges old and new. Two bridges were destroyed by floodwaters on 6 September 2008: Shotley Bridge Footbridge 2 and the Butterfly bridge at Winlaton Mill. The bridges offer excellent vantage points to view the Derwent winding its way through County Durham and Tyne and Wear . There are also a number of footbridges crossing the river as well as a disused railway bridge.

The river is favoured by anglers who can catch a wide range of species there including bream, dace, gudgeon, perch, pike and roach. The first fifteen miles immediately below the dam of Derwent Reservoir to Lintsford are under the control of the Derwent Angling Association,of Shotley Bridge. Here the river contains brown trout and grayling but fishing is by fly only. The river is a popular venue for adventure sports on water, such as kayak and canoeing. Some sections are definitely for the experienced though, due to a variety of hazards including a few relics of the Derwents industrial past.