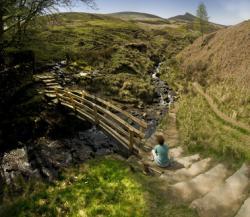 The North Pennines Area of Outstanding Natural Beauty (AONB) and Geopark is an important landscape in the North of England. Consisting of high moorland and broad upland dales, it shares a southern boundary with the Yorkshire Dales National Park and extends as far as the Tyne Valley to the North. The area's western boundary follows the line of the Pennine Escarpment and in the east it runs down into West Durham .

The North Pennines AONB stretches across sections of three counties; Cumbria, County Durham and Northumberland. Six districts lie within the ANOB; Eden , Carlisle , Teesdale, Weardale, Derwentside and Tynedale. The North Pennines currently ranks as the second largest AONB in Britain, with the Cotswolds holding the top spot. The ANOB is bigger than all but two of England's National Parks with only the Lake District and Snowdonia covering a greater area.

The area is noted for rare flora and fauna and is home to several wild alpine plants not found elsewhere in Britain. It is also home to the threatened red squirrels and several species of birds of prey. Fully 40% of England's remaining hay meadows are within the North Pennines ANOB. Along with the area's unique geological heritage, the importance of the North Pennines' wildlife resulted in the AONB becoming Britain's first UNESCO-designated European Geopark in 2003. A year later the area become one of the founding members of the UNESCO Global Geopark family.

One of the unique features of the North Pennines is the Helm Wind, the only wind in Britain with a name. Helm Wind has caught out many walkers attempting to traverse the plateaux around Cross Fell, the Eden Valley fellside, and the valleys in between Alston and Dufton.

Walking is obviously a popular pastime in any area such as the North Pennines. Isaac's Tea Trail is a route of 36 miles that circles the area. The trail runs from Ninebanks via Allendale , Nenthead and Alston. A large stretch of the Pennine Way is in the AONB, including one of the most celebrated stretches through Teesdale. This fertile valley features dramatic river scenery, including the famous High Force and Cauldron Snout falls.

Visitors to the area have more than walking to keep them occupied and entertained. The area bristles with a huge range of attractions, such as the Nenthead Mines Heritage Centre . The centre tells the story of the mineral mining past of the North Pennines. Visitors will find the area has an equally large range of accommodation on offer from simple bunkhouses for walkers to fine country house hotels.