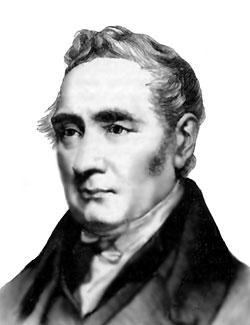 Born in Newcastle Upon Tyne, Tyne and Wear
Born on 9th of June 1781
Died in Chesterfield, Derbyshire
Died on 12th of August 1848

George Stephenson is that rare thing, an inventor who managed to exploit his own work and made his fortune. In so doing he took his place in the pantheon of great British industrial pioneers.
Stephensons is a rags-to-riches story par excellence: born in Wylam on June 9 1781 into a poor family he was put to work as a child, and only became literate as a young adult, paying for own night classes. But from early on he had a fascination for the mechanical, repairing machines from pumps to watches.
When Stephenson heard about James Watts improvements to steam engines he walked to Montrose in Scotland to take a job for a time in a mine using one. In 1814 he demonstrated his improvements to locomotive design with Blucher, the first to use flanged wheels, and with improved valve actuation. He then refined this basic system incrementally in a series of 16 engines.
His work in mines led Stephenson to invent a safety lamp, tested one month before Sir Humphry Davys version: Davy, educated and well-connected, sued Stephenson for copying his design, and though the latter was cleared Davy never accepted the fact.
When rail breakage seemed likely to slow the progress of railway development Stephenson and his business partner William Losh patented a new improved version. He built the first railway to use no animal power, linking Sunderland with Hetton Colliery in 1820, and having persuaded Edward Pease of the value of locomotive power became chief engineer for the Stockton-Darlington Railway that opened in 1825, using Locomotion, the revolutionary engine built with his son Robert. His imaginative approach to problem-solving was seen again in his work on the Manchester-Liverpool line, using bundles of sticks beneath the track driven over marshy ground as in essence a buoyancy aid. And perhaps most memorably Stephenson and his son created the Rocket, winner of the Rainhill trials in 1829.
With the money from his various ventures Stephenson was able to buy the substantial Tapton House in Chesterfield, and to marry a woman previously considered by her father as above him. He died of pleurisy at Tapton house on August 12 1848. He was no scientific thinker, and rarely produced totally new ideas; but he was a great problem solver and improver, and a visionary who inspired among others Brunel.

Contributors: Do you have a site related to George Stephenson?
Supply some content for this page and we will gladly add a link to your site. Email here.